filmed by Miguel Villalobos. Below is the interview that appeared in ZOO last summer. 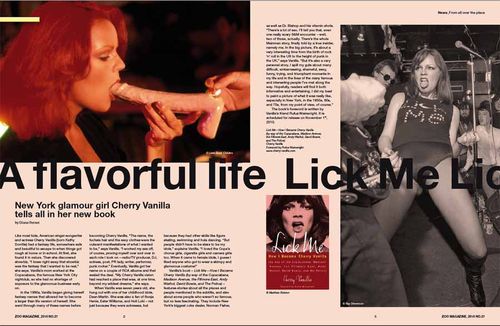 You have to wait until November to read Cherry's tell all book. In a week the new ZOO will hit the stands with my article on her but in the meantime here are a few excerpts from Rufus Wainwright's foreword for her book.

"On first sight of her, I was completely hooked: the shock of red hair, the old Hollywood-style makeup, the haute couture ensemble all mixed with a general enthusiasm and understanding for what my mother and aunt's rustic world was all about. She was the most glamorous person in the room but made no attempts to dominate the space; she happily waited for her victims, and I was reeled in by her elegant and sexy kindness." said Rufus.

"Thanks to Cherry's work with the composer Vangelis, a few years later I was in Greece on one of the most glamorous European trips of my life. There a close friend of hers pointed out to me that she is, in fact, not a woman, not a man, not even a deity-Cherry Vanilla is a whole state of mind, a kind of mental field which, once reached, graces your life with more perspective and thus a grander vision. I understood what this man was saying instantly. Since our fateful meeting that night in L.A I'd definitely experienced several "Vanilla Fields." said Rufus. ….."I had begun to transform myself through my constant and ever-present hunger for discovery, and Cherry was right there, spoon-feeding me ambrosia, poisoned apples, sweet nectar, and all the good and bad elements of heaven and earth required for the creation of a true rock 'n' roll spirit."  said Rufus.

"…behind the sex, drugs and rock 'n' roll is one of the kindest and most loyal human beings the world has ever known. Despite becoming the glorious Cherry Vanilla, onstage tornado and backstage bad girl, little Kathy Dorritie from Queens has always remained and is never far behind-always excited, always enthralled, and always pleased to meet you, whoever you are. In the end, a good little girl dressed in a tutu." Rufus Wainwright.

Diane who is happy to be her friend