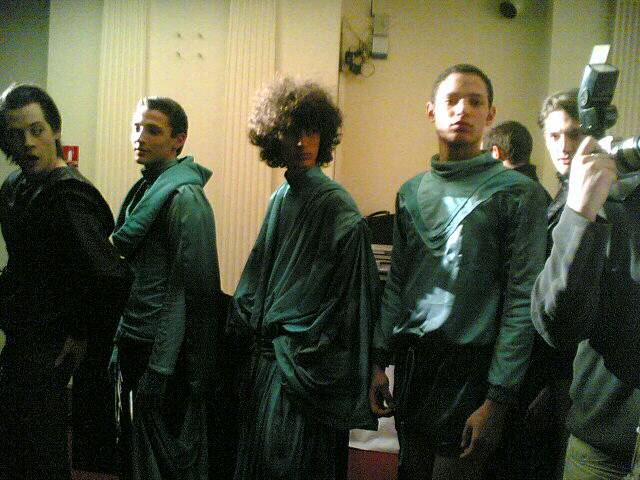 I was sitting talking to Jean Pierre Blanc waiting for Romain’s show to begin when a German TV crew, RTL, came up to me and wanted to ask me a few questions. The woman was a bit in the box shall we say. She said that she wanted to talk to me about menswear. Fine. I accepted the interview. I wish that I never had. First she started with why do you always dress in black, wear your hair like that until I said I thought that you wanted to talk to me  about menswear. She obviously could not relate to Romain Kremer and certainly not to me.  I found myself  in the poisition of having to defend  his right to design and exist. It was a painful experience. Then she asked me who I thought would wear these clothes and we ended up going backstage where there was a model in a wonderful white knit cardigan and I pointed to him and said anyone could wear that. Then there was a guy in a printed t-shirt with draped bits on it and skinny stretch trousers, I asked the model how he felt in the clothes. "Great" was his response. I asked him if he could see himself buying the look and he said yes. There in front of her face were some customers. It did not stop there. Her cameraman came back where I was sitting and discussing this nightmare interview with another journalist and he continued to film me. It was totally unpleasant and I’m sure that I will come off as a total bitch since I have little patience when talking to rude people that are so closed minded that they should definitely not be in this business. The show received very generous applause.