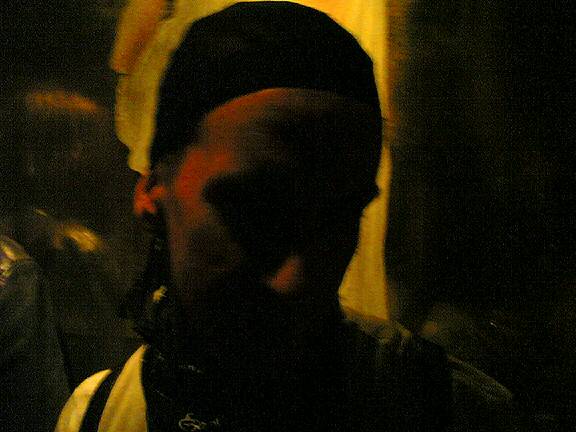 Seems like all the fashion parties are happening this season at the Baron. My friend Tinko  Czetwertynski called me just before I was leaving for  the Jeremy Scott party at the Baron so I asked him if he wanted to join me. He did and in 15 minutes his Smart car was at my door.

Tinko is the man behind the opening and closing credits on my tv pilot, I love his work.

Kelly Cutrone of People’s Revolution threw the Jeremy Scott party at the Baron.

Kelly was telling us how she opened a concert singing for Nina Hagen. Kelly is one cool woman, I think that I could listen to her forever. I wished that I’d had my camera running so I could make a little video so that I could share it with you. It was the first time I left the house with just my digital and my lipstick. Sometimes you just have to go light. We only met yesterday but as she said we are from the same tribe and our paths were always crossing, between us we could fill a book about NYC in the 80’s.

I got a really warm welcome from Jeremy Scott when I came in and we had a nice chat about the quality of his life in LA. Where else could you have deer running through your back yard and be walking distance from the location where they had out the oscars. Country style with high voltage glamour. I had to know what kind of car he had, a jeep.He is super happy to be living in LA.

Marcus Mam was there, he’s been a friend of Jeremy’s since the beginning and is an excellent photographer. I’ve had a lot of pleasure following his work on the New York Times website. He does a lot of shoots for the Style magazine with Elisabeth Stewart and we share a friend in common, Brian Leitch. I don’t know why I don’t have an image of him to show you. His first photo job was with French Vogue and my friend Donald Schneider gave him his first chance.