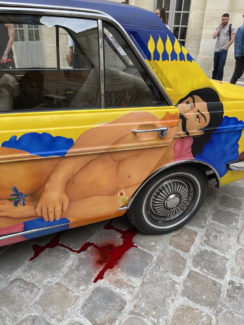 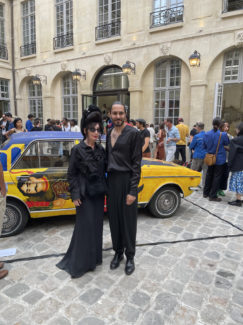 Currently on view at 3537 is the PaykanArtCar  where the car is the canvas to express the horrific killing of 20 year old Alireza Fazeli Monfared, he was beheaded because he was gay as well as to give a voice to the LGBTQIA community that is currently being persecuted in Iran. The car was gifted by Mohammad Reza Shah Pahlavi of Iran to the Romanian dictator, Nicolae Ceaușescu. The side door of the car is slightly open and blood is dripping out of it expressing the beheading of Monfared.

Since the Islamic revolution in 1979 thousands of LGBTQIA+ community have been executed by the Islamic Republic of Iran. Traditional characters from Persian literature were used to transform the car into an art piece. The drawings are inspired by the Persian Book of Kings. A youtube video of our interview will follow but currently having upload problems with YouTube.