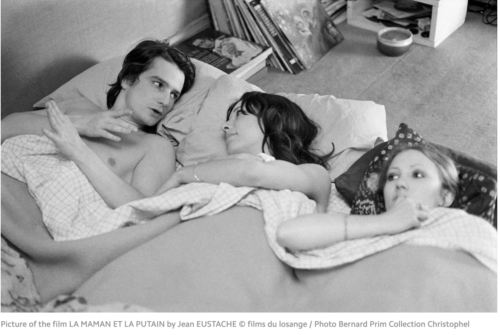 I remember decades ago while living in New York I saw the 1973 film La Maman et La Putain by Jean Eustache,  I decided this was my idea of Paris and this is where I wanted to live. It took decades for that reality to happen but in the end of 1990 I did move to Paris and found, in part, that many of the characters created by the director Jean Eustache for the film La Maman et La Putain did actually exist. A restored version of the 1973 film premiered at the 75th edition of the Festival de Cannes. The Mother and the Whore won the Grand Prix fifty years ago in Cannes and stars Francoise Lebrun (Veronika) , Jean-Pierre Leaud (Alexandre) and Bernadette Lafont (Marie). The film was made with these three actors in mind and had one of them not agreed to the film, it would never have been made. Jean Eustache has an aura of beauty and evil that made him one of the most singular personalities of French cinema. He is most known for this film which is considered a key work of post-Nouvelle Vague French cinema.

The film is personal and intimate and takes place in the neighborhood where Jean Eustache spent much of his time. Marie, Veronika and Alexandre are trapped in a painful love triangle which is also defined by a time when the reinvention of the notion of the couple was attempted. Essentially the film takes place at the two cafes: Les Deux Magots and Café Flore and the apartment of Marie, played by Bernadette Lafont. In fact this was the real apartment of the person that inspired the character, Catherine Garnier. The film was based on the failure of the union between Garnier and Eustache and a few days after the first screening of this work, Garnier committed suicide and left a note for Jean Eustache: “The film is sublime, leave it as it is.”

Eustache favours direct sound which sometimes obliterates bits of the dialogue. The film has an incredible strength, and its length of 3 hours 40 minutes amplifies the power of the monologues. The three characters barely speak to each other, they soliloquise. The characters are prisoners of their haunts. They are continually rehashing things and going in circles with ever-present alcohol, cigarettes and orchestrated love scenes. Their’s is not a gay love story but one of suffering. On November 5, 1981, Jean Eustache shot himself in the heart with a revolver. It was said that perhaps because for him there was no more cinema that he ended his life.

In a book entitled Au travail avec Eustache, published jointly by the Institut Lumière de Lyon and Actes Sud, the man who was also the first assistant to André S. Labarthe, Marguerite Duras, Alain Robbe-Grillet and Jacques Rivette, looks back at the concrete conditions of the genesis of a work that was of the order of a meteorite, whose luminous darkness shook those who were lucky enough to realise that it was carried less by a desire for representation than for revelation.

« Jean-Pierre Léaud on the set of La Maman et la putain ? “The long tirades lasting several minutes cause him memory problems and he is constantly seen reciting the scenes in a low voice. He mixes vodka and chocolate, and carries around a whole pharmacy to help him remember his lines, which he often asks me to repeat for him.

Further on, Eustache is looking for “the breaking point”: “When he is tense, anxious or in a bad mood, Jean is very hard on Léaud. (…) By reacting in this way, Eustache creates an urgency and a conviction in Léaud’s acting that will be a big part of the film’s strength.” Au travail avec Eustache.