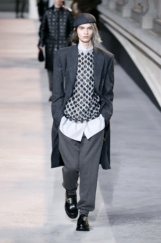 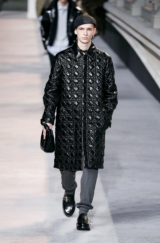 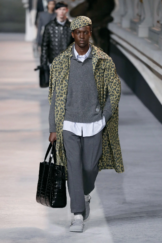 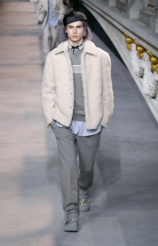 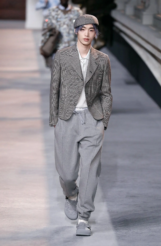 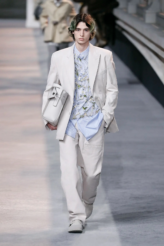 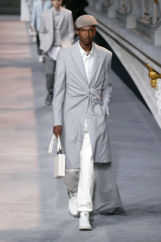 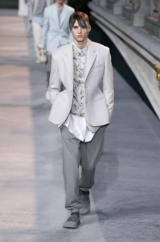 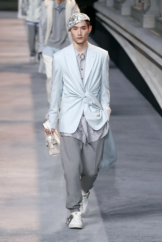 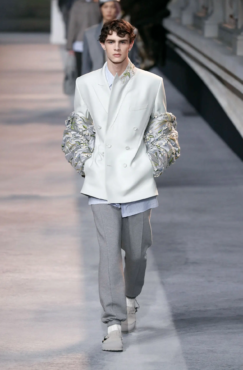 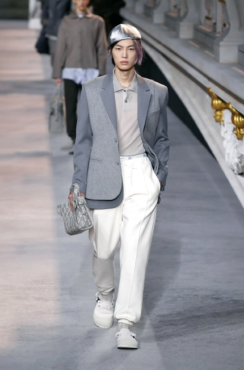 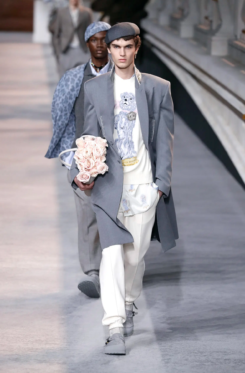 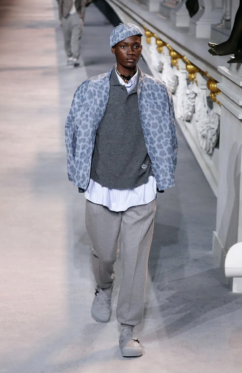 I remember in 2008 talking to Kim Jones when we were in Stockholm for +46 and he had just been appointed Creative Director at Dunhill and he told me he did his own line as a trampoline to designing for a big brand. Look at him now…Dior Homme, Fendi, men, women, couture…there is nothing that this man can not do and do it well. Jones is stimulated by the heritage of the house and how he can take the aesthetic codes and transform them to make them relevant for now. If Christian Dior was known for the New Look in 1947, Kim Jones, 75 years later has taken the tailoring of the iconic bar suit and translated it for men. The construction is impeccable with hand stitching showing the art of tailoring. Christian Dior was known for his garden and his love for flowers which appear here embroidered on organza or in a saddle bag full of flowers. If the idea of fashion is to create desire..Jones did it in spades from the tailored pieces to the slouchy trousers, the twisted drape at the waist, the textures, the knitwear, the embroidery, the shoes with jewelled shoes, the jewellery created by Victoire de Castellane, the magnificant berets by Stephen Jones, embroidered Birkenstock, this season’s new collaboration, I could go on and on, but the pictures say it all.

The set was as sublime as the collection, a re-creation of my favourite bridge in Paris, the Alexandre-III with the models walking on two levels all created in a huge box set up on Place de la Concorde.  Kim Jones and Stephen Jones took their bow together at the end of the show and it was pure joy, a celebration of Christian Dior’s birthday, 75 years for the House of Dior and 25 years that Stephen Jones collaborated with the House of Dior. A note was left on the seats to the memory of Andre Leon Tally who had just a few days before passed away.