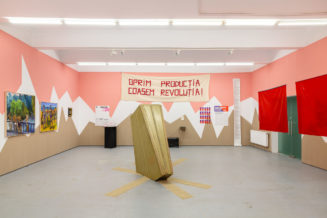 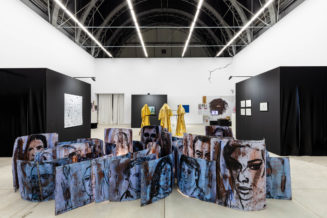 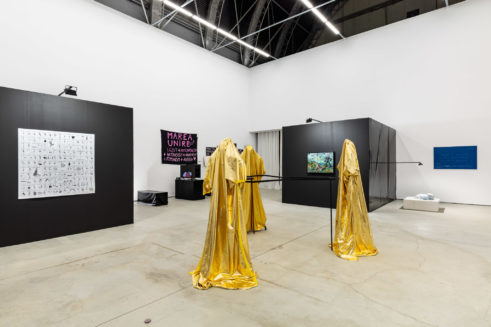 In addition to the Apparatus 22 collective artistic practice, Dragos Olea  is working with curator Sandra Demetrescu (chief curator of MNAC – the Contemporary Art Museum) as the curatorial duo KILOBASE BUCHAREST ) they created a landmark show for RO and local/regional art history..

The following is Dragos Olea’s introduction to the project:

Museum of Queer Culture [?] in Bucharest is a series of exhibitions titled YOU FEEL ~ AND DRIFT ~ AND SING. The exhibitions are produced in partnership with The Contemporary Art Museum (MNAC) work as a nonlinear retrospective of RO queer artistic practices in the last two decades (2001-2021).”

YOU FEEL ~ AND DRIFT ~ AND SING series unfolds in several places in two stages: the first show is hosted in the vast space of Combinatul Fondului Plastic and there are also 3 tentacles – exhibitions in Sauprainfinit Gallery, Spatiul The INSTITUTE and SWITCH LAB.

We are very  happy about the stories they tell, the dialogues, the quirky and adventurous display we did with architect Laura Paraschiv / CIRCA 1703 – 3071.

TRIUMF AMIRIA. The Museum of Queer Culture [?] in partnership with The National Museum of Contemporary Art (MNAC), presents the series of statement exhibitions YOU FEEL ~ AND DRIFT ~ AND SING in a tentacular approach in four art venues in Bucharest: Combinatul Fondului Plastic, Suprainfinit Gallery, Spatiul THE INSTITUTE, SWITCH LAB

A celebration in which you are invited to feel ~ drift ~ sing among an abundance of queer artistic voices chanting about identity, desire, trauma, ecology, healing rituals, a daring and progressive future, differences, stigmata, racism, the contemporary art system, the reclaim of public spaces, the splitting off definitions and oppressive norms, the language and neologisms of an extended vocabulary, fluidity and generosity.