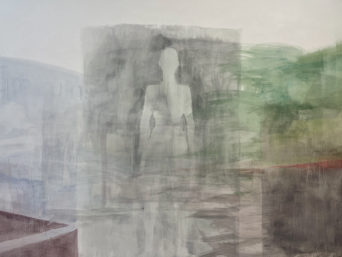 Today was my second visit to the Floating Studio exhibition of Miltos Manetas at Galerie Hussenot. The exhibition is directed by Jérôme Sans. Today was supposed to be the last day of the exhibition however it has been extended to Saturday, January 15th.

While Miltos was explaining the transformation of his art work, his mentor Nicolas Bourriaud arrived. Bourriaud is a celebrated curator and art critic and in 2000-2006 was the co-founder and co-director of the Palais de Tokyo in Paris. Prior to that Nicolas Bourriaud curated Traffic, at CAPC musée d’art contemporain de Bordeaux (1996), and defined what later became known as Relational aesthetics. Artists in Traffic were Miltos Manetas, his then girlfriend, Vanessa Beecroft, Maurizio Cattelan, Philippe Parreno, Kenji Yanobe, Liam Gillick, Henry Bond, 29 artists in total. The idea was to showcase artists that Bourriaud identified as defining Relational Aesthetics.

Back to tonight, Manetas, now keep in mind that his work reflects the fluidity between virtual and physical spaces, has been erasing the original artwork which is made from pigment and soap. The walls will probably be birthing bubbles for the next few years..Manetas  envisions the art on the walls  turning into mist which, in the virtual world, symbolises digital dust. Manetas likes the idea that his  art can be erased as easily as online searches. Every day the work comes and goes and from tonight till Saturday Manetas will be erasing his art and making it lighter and lighter until it appears as ethereal as steam or…digital dust.

Manetas will start building his floating space in an NFT based metaverse,  a metaverse that will never disappear because its construction elements are NFT’s. He will build one square meter of floor for himself, that is how the studio will start, and then when collectors start buying parts of the art the studio grows with the collectors or institutions.  Collectors will have the right to reproduce the art, they can make it big or they can make it small and when they reproduce it they can go with their phone or computer, hold it up to the art and enter a portal that will take them into his studio. It makes me think of Being John Malkovich, the 1999 film  directed by Spike Jonze and written by Charlie Kaufman where for a fee you could become John Malkovich. Perhaps you will meet Manetas in his studio and he will be alone or with a friend when you enter. His idea is to invade all spaces so the floating studio could be anywhere.  Manetas’ NFT starts from real life and goes virtual.

Below is a post by Geraldine Postel, CEO CONTINUUM DE COM in ASVOF: