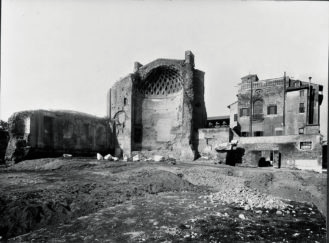 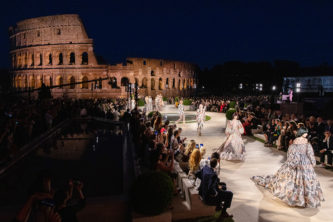 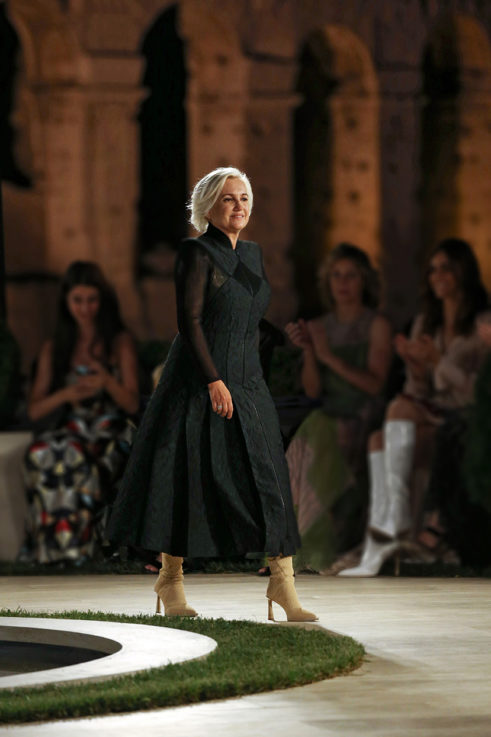 Ever since Edoardo and Adele Fendi founded their luxury Maison in Rome there has been a strong bond between the world of art and culture. In January 2013 FENDI announced the restoration of the Trevi Fountain , this started an ambitious project for the preservation of cultural heritage of the city of Rome. In addition to the Trevi Fountain, the project includes the restoration of the complex of the “Four Fountains”. In addition to the “Four Fountains” in 2016 confirmed its commitment to the patronage for the City of Rome and its fountains with the restoration and preservation of the fountains del Gianicolo, del Mose, del Ninfeo del Pincio and del Peschiera.

In 2015 FENDI moved its HQ to the Palazzo della Civilta Italiana in the EUR district. After more than 70 years it opens its first floor of the Palazzo to the public and devotes it to temporary exhibitions and installations. Opposite Palazzo FENDI is a sculpture by Giuseppe Penone Foglie di Pietra which was commissioned by the Maison as a gift to the city. Other activities include Scuola di Alta Formazione (School of Professional Training) for youth training and their support of the Italian Pavillon at the 57th International Art Exhibition of La Biennale di Venezia.
In September 2017 FENDI announced a three-year partnership with Galleria Borghese supporting exhibitions taking place at the Galleria Borghese for the following three years. In June 2018 FENDI supported the artwork and performance Revenge by artist Nico Vascellari, realized at the MAXXI museum in Rome and winner of the 2006-2007 edition of the Premio per la Giovane Arte Italiana award of the MAXXI Arte collection and previously exhibited at the 52nd International Art Exhibition of La Biennale di Venezia of 2007.
In October 2018, FENDI supported the creation of the most impressive architectural mapping project ever realized in Italy: Lux Formae by the Hungarian artist Laslzo Bordos. The project was produced by Solid Light for Videocitta. I might add at the same time ASVOFF was held as part of Videocitta. For one night the HQ of FENDI was transformed into a palette by the artist using projections as a hi-tech brush 4.0.

It took FENDI and the Parco Archeologico del Colosseo 15 months to complete the restoration and enhancement of the Temple of Venus and Rome, this work is announced via a book published by Electa 2021.

The restoration work, which began in September 2020 and ended in July 2021 with further interventions related to the enhancement and accessibility of the area, involved more than 60 professionals. The working synergy created between PArCo and FENDI has allowed all the planned objectives to be fully achieved, despite the difficulties caused by the pandemic.

The volume “Il Tempio di Venere e Roma” dedicated to the Temple of Venus and Rome, with its cover in raw canvas with laminated bronze graphics, wants to recall the fundamental colours of the monument, whose splendour is revealed by the rich photographic report that combines archive images with photos taken during and after the various phases of restoration, as well as of the exceptional fashion show of the Fendi Couture collection that was held in the Venus cell in July 2019.