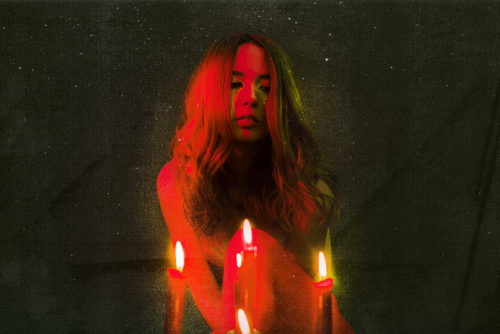 After touring with Iggy Pop, Karen Elson and Brandon Flowers, Findlay left the major labels and took control of her own art. She self taught herself film. ‘Strange One’ is lifted from an upcoming solo project that is in the works.

“It’s about feeling like an outsider and embracing your own dark traits. I wanted to create something gloomy and cinematic. Something almost supernatural sounding, I’m so happy the release could coincide with Halloween – it makes a lot of sense to release this song this time of year. The string arrangements are huge and dominating like the soundtracks to a lot of old film noir movies,” says Natalie.

Visually, the video for Strange One was inspired by these  classic films too, like Sunset Boulevard and Lynch’s ‘Eraserhead’.  “I’d always wanted to play around with using prosthetics and creating a weird character for myself. I’m really fascinated by the lengths people go to change how they look whether  it’s very subtle or bordering on botched and what our personal or collective idea of beauty is. Even just photoshop and filters…  Why do people filter their faces? Why is it so normalised and why are people so afraid to be their authentic selves? I’m guilty as well. I use filters, I’ve considered cosmetic treatments… I’m just afraid of where I would end if I started doing it.  The line between vanity and insecurity is so thin. I’ve been told during my career  that I should look a certain way, that I’ve been too thin or gained weight or that I’m getting too old… It’s tough trying to retain some sense of self love when you’re constantly bombarded with this unreal and unattainable image of perfection that we’re fed daily, hourly even, especially as a woman.”

Natalie self directs her videos, writes and records the songs in her home studio and now takes the first step into releasing music without a label; ‘Life Is But A Dream & ‘Strange One’ being Findlay’s first official release as an independent artist. With that comes the freedom and ability to create a unique, distinct artistic perspective that the impressive visual components of her first two singles of this year demonstrates.

“I made the decision that the next music I released I had to own, I had to be in control and I didn’t want to ask permission or opinions from anyone else on the making of,” she adds.

“The last few years were tough for me, navigating the death of someone close and dealing with the aftermath, then the pandemic, the lockdowns… my mental health took a big hit. I was totally burnt out for a while.  I had to work very hard on myself to get back to a place where I even felt comfortable releasing music. I think towards the end, it was great having something to work towards between all the chaos and heartache,” says Natalie.

‘Strange One’ is out now, taken from a soon to be announced solo project from Findlay and is out now in partnership with Kartel Music Group.