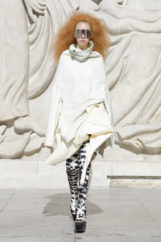 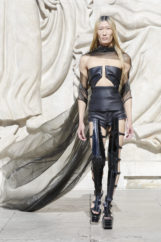 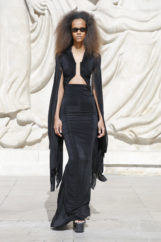 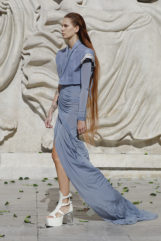 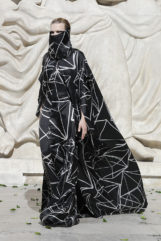 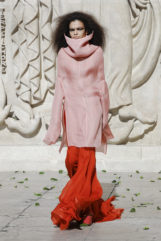 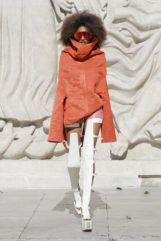 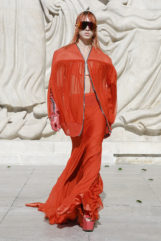 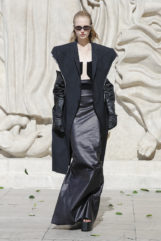 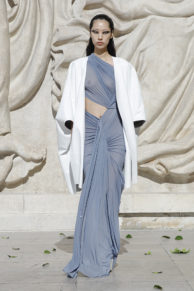 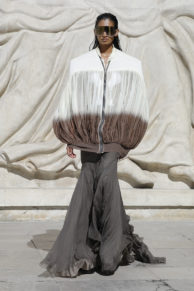 I enjoyed Rick Owens live streams from Venice but IRL is even better. As we were waiting for the show to begin out walks Michèle Lamy alone on the catwalk. Once she did her turn, the show began. It was cinematic, sensual, sexy, hard core Rick Owens and well, outstandingly beautiful. Oversized bombers and draped transparent pieces like updated Madame Gres.  All looks were beyond desirable. In a season defined by sexuality, Rick Owens wears the crown. Killer pieces in leather sculpted the body and the shoes and boots looked like they stepped out of Crash by David Cronenberg. The spider web knits had a strategically placed circular opening that was reminiscent of the mens collection when journalists in the front row were a bit shocked when they got an upfront view of some of the mens ‘private parts’.

Goossens produced the brutalist chokers, Goossens is the Maison that produced jewelry for Coco Chanel, Cristobal Balenciaga and Madame Gres in the 50’s.

Show notes indicated the fog machines were non-toxic and jackets and bags in Pirarucu dragon scale leather is a food byproduct produced by indigenous communities in Brazil.

Rick you were sublime, welcome back to Paris.