For the Spring/Summer 22 collection, Moncler broke down boundaries in the fashion world, uniting people in an immersive digital experience that takes the viewers on a journey through five cities (New York, Milan, Shanghai, Seoul, Tokyo), hosted by singer Alicia Keys and actress Victoria Song.

“Removing the limitations of the physical realm, the MONDOGENIUS digital experience seamlessly linked the two worlds, creating an open space to engage in new conversations, exchange ideas and welcome in everyone’s creative expressions.” Moncler said in the press release.

The result is an ambitious project which acts as a melting pot for cultures, forming an eclectic creative expression that connects the physical and digital world.

In an interview prior to the show, the mastermind behind the event, Moncler Chairman and CEO Remo Ruffini expressed that even though the product remains core for Moncler, they wanted to take this moment “to shift the focus from product to culture”.

To do so, the brand tapped to key figures around the globe who represent the zeitgeist and embody the Moncler DNA, such as: singer Alicia Keys, actress Victoria Song, singer Solange Knowles, filmmaker Luca Guadagnino, architect Qi Shanshan… and to take it one step further, the event also blended different genres of sports, entertainment, art and fashion to present a unified definition of the Moncler culture which speaks to all generations.

The hour long presentation started off with JW Anderson’s short film, shot in the streets of Milan which portrayed gender-fluidity in youthful communities who were dressed in vibrant patterns and splashes of colour. Next, we were in Shanghai, in a neo futurist space filled with neon blue cables and connected video-screens, showing the dynamic city life as architect Qi Shanshan recited a monologue in Chinese. A short pause later, in New York we witnessed a performance by Solange, displaying the latest Moncler collaboration with Veronica Leoni.

Moving from one city to another was confusing at first, but then we were transported to Shanghai, where Chinese designer DingYun Zhang (the latest creative to join the Moncler Genius team) had a group of models standing on an installation of a cloud, wearing oversized puffers with holes, astronaut hoods, furry moon boots and neon jumpers… all in aquatic colours. The collection didn’t look like it belonged to today, but as if it came from the future. Zhang’s futuristic touch on streetwear offers exactly the type of garments Gen Z would respond to… vibrant, innovative and wearable. The collaboration was a match made in heaven. 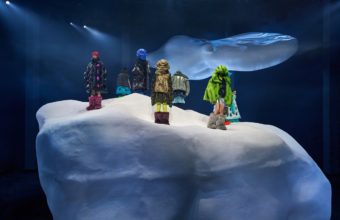 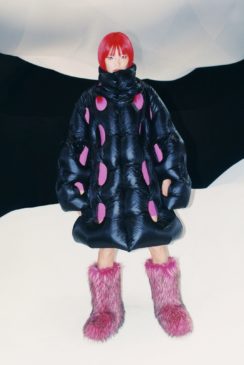 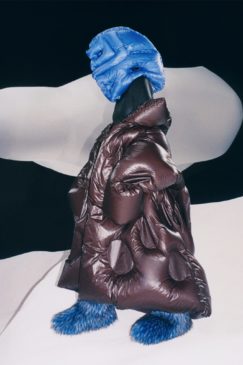 Another newly appointed member of the Genius club was the South-Korean eyewear label Gentle Monster, who built a dystopian, neo cyber-punk setting to display their latest products. From screen infused sunglasses to massive all black logo-ed puffers, sleeping bags and down jackets… the installation featured giant screens, like the floating Monolith in Space Odyssey, overlooking the faceless models. The performance, according to Moncler, was ” influenced by the way our digitally minded society measures emotions.”

Since establishing the Genius line, Moncler has proven that it does not stick to traditions, but would rather push the envelope with each season. After watching MONDOGENIUS, you feel like you’ve witnessed a digital festival about evolution, culture and community, rather than a fashion show.

I think the words of host Alicia Keys sum up Moncler’s mission very clearly, “We can’t go back to yesterday, we have to move forward”.