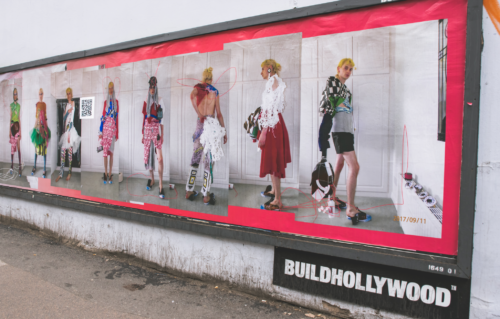 Matty Bovan on the street of Manchester and Sheffield

Northern United Kingdom based fashion designer Matty Bovan is redecorating the streets of Manchester and Sheffield throughout September with his 20 poster sites. An outdoor fashion exhibition, a captured fashion show, these imposing images announce Matty Bovan: Boomerang, his immersive and participative work that will be exhibited at the Yorkshire Sculpture Park in the Bothy Gallery, from October 22 to 26, 2021.

Wanting to question the construction of identity and those who control it, such as the fashion industry, Matty Bovan had the idea to make the public an important part of his exhibition by physically integrating them into his art installation. Visitors will have the opportunity to choose from several of his fashion creations, and then be photographed in his textile sculptures, in the skin of these characters. At a time when social networks rule our lives, more than 95 million images are published every day on Instagram, these captured photos will be part of an exclusively paper album and will not be broadcast on the networks. A way also to give visitors the opportunity to really transform into a fashion creature, a way to say that everyone can be fashion.

The 31-year-old designer, who graduated from the prestigious Central Saint Martins school in London in 2015 and won several awards like the LVMH Graduate Prize in 2015 and the international Woolmark Prize in 2021, stages himself with his creations on his posters that cover the streets. The imagery is composed of photos of him, donning a character in each photo. Sculpting his patterns on his body, hair sometimes pink then multicolored, changing looks and makeup, just like his fashion, high in color, he collaborated with Marc Jacobs for the spring 2016 collection and Miu Miu in 2016. “I see the world in color, I can not help it” he said in an interview for matchesfashion. The one who reminds a young Vivienne Westwood or a John Galliano to Carine Roitfield also questions the fashion image, what it is constituted of, for whom it is attributed. It is through his creations that visitors will be able to slip into his skin, or into a skin that is not theirs, by allowing themselves to reproduce these images seen in the street. These images that are a mirror, a boomerang. Become a character of Matty Bovan, the time of a photo. 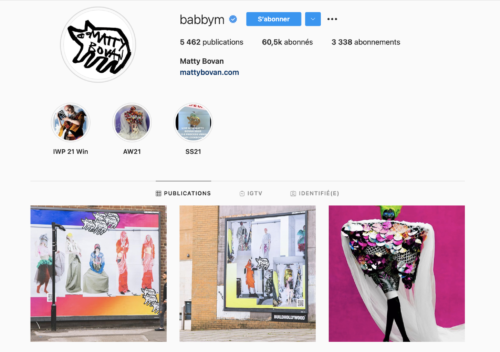 The Yorkshire Sculpture Park, the first international center dedicated to modern and contemporary sculpture, is the perfect place to host the designer’s project. He specialized in fashion knitwear which allowed him to design pieces with voluminous proportions by playing with the size of the yarns and the combinations of textures, resulting in garments with asymmetrical proportions that are close to sculpture. Inspired by the fashion references of his country, the one who can remind us Alexander MCQueen revisits the tweed, is not afraid to mix colors, is rock, grunge, young and sometimes makes us fall back into the 80s London style. You just have to go on his website which looks more like a vintage store than a fashion e-shop of today, and which will give you, I hope, the desire to dive into his world the time of an exhibition.

“Matty Bovan: Boomerang” at the Yorkshire Sculpture Park in the Bothy Gallery, from October 22 to 26, 2021.