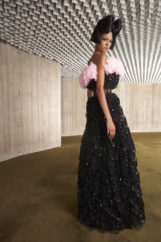 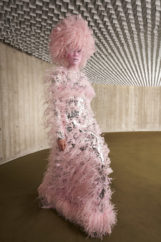 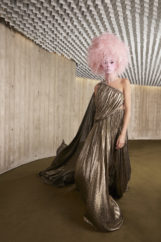 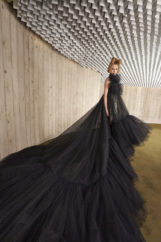 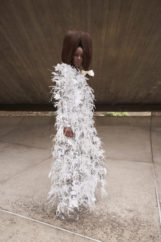 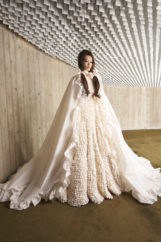 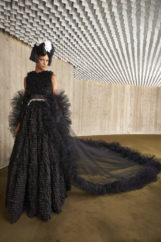 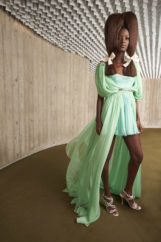 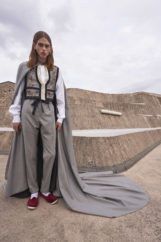 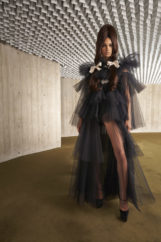 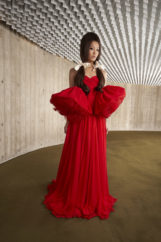 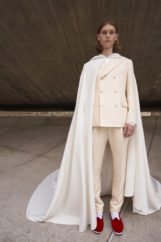 I have no idea if Valli has already done costumes for the cinema but if not…he certainly should. A dreamy collection stepping into or stepping out  of a highly stylised Italian horror film. I had visions of Visconti melds into Argento. Or better yet, Vally of the Dolls meets Mars Attack. Frothy dresses are perfect for the red carpet or the most decadent party. The hair by Odile Gilbert was beyond excellent. Also the cinematography really worked even though it was basically a catwalk it was done in such a way as to make it really exciting and intriguing. Totally enjoyed the experience. Day one of Haute Couture and it is definitely not dead nor is it dying any time soon.

Paris, cradle of Haute Couture. Paris to which this Art belongs. Paris burning with its renewed vitality. An evasive nocturnal walk, with a slight taste for danger in search of the pleasure of reliving these emotions. A sense of unknown pervades one’s walk in the Ville Lumière. Pieces of present, past and future memories emerge. Its glares, its glamour made up of nights filled with lights reflected on wet asphalt, its promiscuity, its eclectic and voyeuristic aesthetic à la Ryan Murphy. A Promenade to meet the people entering this voluptuous and provocative night, a ride that will end with an exchange of clothes and the line between day and night fading away. Extra-ordinary creatures who abandon their sensual garments opting for the attire of men – strangers, friends, lovers – whom they met in this adventure of Parisian glamour, saturated by the neon lights of a penthouse, a private club, a lounge or a parking lot. Courtesy of Giambattista Valli Imagery and video shot at Espace Niemeyer © NIEMEYER, OSCAR / Adagp, Paris, 2021