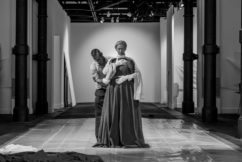 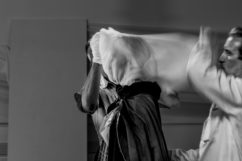 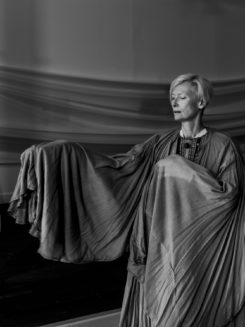 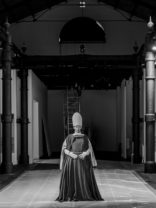 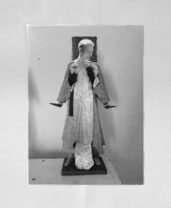 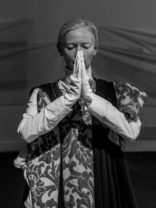 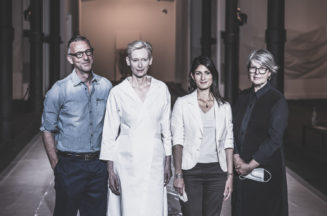 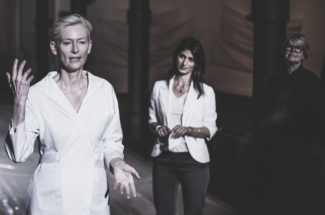 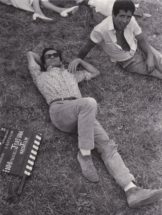 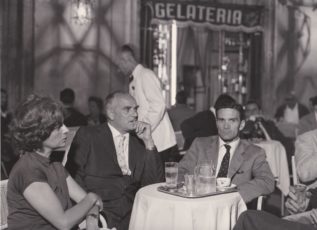 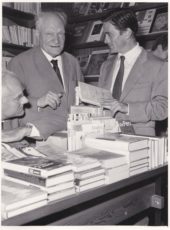 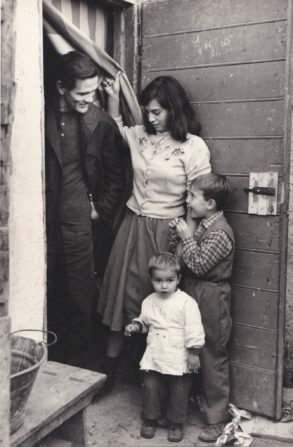 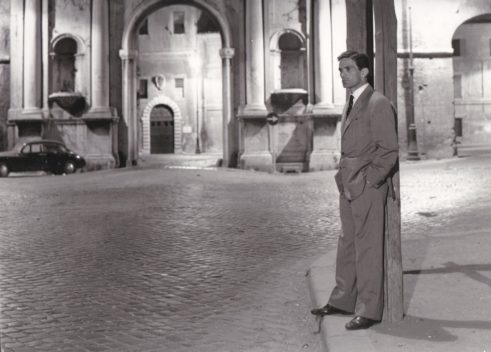 I was not present in Rome but enjoyed the live stream of Embodying Pasolini which was supported by the Mayor Virginia Raggi and dedicated to the relationship between fashion, costume and cinema in rome with costumes designed by Danilo Donati for the films of Pier Paolo Pasolini. Forty costumes designed by Danilo Donati for the Pasolini films were the starting point around which Olivier Saillard and Tilda Swinton imagined Embodying Pasolini.

“Romaison continues to narrate the magic of the link between cinema and fashion in the Capital, evoking the dream of films d’auteur and costume ateliers that represent local excellence. With Embodying Pasolini, a performance conceived and interpreted by Tilda Swinton and Olivier Saillard, whom I thank for choosing Rome, we begin to pay homage to this immense artist, director and intellectual, one year after the centenary of his birth. It is an important step within the project that we are carrying out to enhance a unique in the world city system, which renders Rome the capital of creativity, art, cinema, and high-level craftsmanship. Rome is a laboratory of research and experimentation that brings international directors and productions, costume professionals and scholars, and, more in general, the many protagonists of the world-famous Made in Italy quality to the city itself. Rome starts anew from its excellences, and Italy starts anew with Rome”, says the Mayor of Rome Virginia Raggi.

Embodying Pasolini is a performance that expresses the artistic immortality of the cultured artisanal object. The costumes that translated the poetic and cinematographic vision of Pier Paolo Pasolini come to life, demonstrating the value of the Archive as a source of inspiration, but also as a place for the collection of works that then become available to new, contemporary visions. The event, strongly supported by the Mayor of Rome Virginia Raggi and organised  by Zetema Progetto Cultura and curated by the fashion historian Clara Tosi Pamphili. ROMAISON anticipated the celebrations for the centenary of Pier Paolo Pasolini’s birth, choosing Testaccio as its specific setting, one of the neighbourhoods most linked to Pasolini’s imagination and present in many of his works, from the collection of poems Le Ceneri di Gramsci to the final scenes of the film Accatone. Celebrations in 2022 will involve the whole city, starting with a large exhibition spread over three locations: Palazzo delle Esposizioni, the MAXXI, and the Barberini Corsini National Galleries.

The project Embodying Pasolini was born in the city of Rome during a stay by Saillard and Swinton at Villa Medici.

The costumes created and preserved by Sartoria Farani, the wooden hat blocks from the Laboratorio Pieroni, which like silent presences are present on scene throughout the performance, the Mattatoio (ex-slaughterhouse) itself, which has become an exhibition space hosting the action, are the emblems of a creativity that – renewing itself in form and in keys of expression – continuously reinvents itself and tirelessly regenerates content and container.

Olivier Saillard – a recognized fashion historian, the former director of the Galliera Museum in Paris, and world-renowned fashion curator – and Tilda Swinton – an icon of international cinema, awarded with the Golden Lion for Lifetime Achievement in 2020 – set out to imagine the spaces of Pavilion 9 as an artist’s atelier. It is a place in the making, with work tables, and where the performance is built as action and emotion before the eyes of the audience called to participate in it.

The costumes, taken from films such as The Gospel According to Matthew, Uccellacci e Uccellini, Oedipus Rex, Porcile, The Decameron, The Canterbury Tales, The Flower of the Thousand and One Nights, and Salò or the 120 Days of Sodom, recreate an unprecedented dramaturgy. “Emptied” of the bodies of the actors, the costumes evoke an absence. An absence that Tilda Swinton will fill, trying on the costumes again and again, lending her body, her thoughts, and her experience each time to a different story. In this story “the base is the shoulders and the moulding is the flesh,” as Olivier Saillard writes, underlining the paradox on which the performance is anchored, physicality as opposed to the exploration of absence.

Danilo Donati, the set and costume designer, was awarded two Oscars for “Romeo and Juliet” by Franco Zeffirelli and for “Il Casanova” by Federico Fellini, respectively in 1969 and 1977, is a fantastical narration made of textures of thread, fabric, colours and shapes. An extreme and refined experimentation, carried out in Donati’s partnership with Pasolini, beginning in 1962 and continued until the director’s death, through the use of materials such as wool, cotton, natural fibres, in a myriad of different uses. From the pictorial citations of the frescoes by Piero della Francesca in Arezzo, evoked in The Gospel According to Matthew, to the loom weaving created for

Oedipus Rex, to the “cartridge belt” shapes of the soldiers’ costumes of the dream in Porcile, to the rigidity of the felt, to the jubilation of velvets, fringes and laminates in The Flower of the Thousand and One Nights, to the famous dresses worn in Salò or the 120 Days of Sodom.

The costumes were brought to life in Embodying Pasolini: object and subject interpreted and understood as double, companion and opposite.

Embodying Pasolini is promoted by Roma Capitale, organized by Zétema Progetto Cultura with the collaboration of PalaExpo, and produced by StudiOlivierSaillard with Aymar Crosnier’s coordination. Artistic collaboration by Gaël Mamine.

Many thanks to Massimo Serini for Tilda Swinton’s Hair and Make-up.

He is the author of many publications, including “Histoire idéale de la mode contemporaine” (2009) and has curated exhibitions such as “Yohji Yamamoto:

Since 2005, alongside his work as a historian and curator, he has chosen to follow the poetic vocation of performance, conceiving projects such as “The Impossible Wardrobe”, “Eternity Dress” and “Cloakroom” with Tilda Swinton; “Sur-Expostion” with Charlotte Rampling and Tilda Swinton; “Models Never Talk” and “Couture Essentielle.” In 2018, he launched his first haute couture t- shirt collection, “Moda Povera”.

Scottish actress Tilda Swinton, Academy Award winner and Golden Lion for Lifetime Achievement winner, after studying literature and political science at Cambridge, takes her first steps in the theatre and then devotes herself to cinema and other forms of experimental art, such as avant-garde performance, proving to be an unconventional artist.

She collaborates with great contemporary directors, from Luca Guadagnino to Wes Anderson to Pedro Almodovar, taking part in original projects, and even participating in blockbusters from the Marvel Universe.
To perfectly embody Tilda’s needs is the avant-garde work of the English director, painter and set designer Derek Jarman, an activist for LGBT rights. With him, she made her cinematic debut in 1985 with the film “Caravaggio”. They collaborated for eight years and seven films – winning the Coppa Volpi in Venice in 1991 for the best female interpretation in “Edward II” – until his death in 1994.

In 1992, her memorable interpretation of “Orlando” in Sally Potter’s film leads to a fame that culminates at the next Cannes Film Festival, where she is present with two films in competition: “Memoria” by Apichatpong Weerasethakul and “The French Dispatch” by Wes Anderson.

In 1995, she performed in an exhibition entitled “The Maybe”, conceived by the artist Cornelia Parker, held at the Serpentine Gallery in London and at the Barracco Museum in Rome, where Swinton lay eight hours a day in a glass case, apparently asleep, for a week.

ROMAISON is a project that was born from the exhibition held at the Ara Pacis Museum in Rome in October 2020, based on a vision of relaunching Roman high craftsmanship that binds Fashion to Cinema, strongly supported by the Mayor, Virginia Raggi, and realised by Zètema.

The exhibition was the opportunity for a unique situation where, together with the artistic and artisanal skills of the Roman Costume Ateliers, an extraordinary heritage of Fashion History Archives was discovered. Until now, the production archives of the Sartorie, their work for cinema that began when cinema itself was born in Rome, the many awards won, the documents of esteem and affection of actors or directors from silent cinema to today, all these were well known.

The project also brings to light the archives of the items of clothing and accessories that each of these Sartorie keeps as a source of inspiration: authentic pieces ranging from the late 1700s to the present day, from Worth, Poiret, Dior, Balenciaga, to Yves Saint Laurent. A true widespread museum. ROMAISON tells and promotes this Roman characteristic, a story that unfolds with contemporary social media narratives and continues to its destination at an operational location whose activities go beyond the traditional definition of a museum.

The peculiarity of the Archives of the Roman Sartorie leads to a dialogue with costume designers but also with fashion houses, and highlights the need for serious cataloguing work. A project that unites public and private, in order to share a heritage that is at the origin of the true Made in Italy, and that also leads to protection of the asset.

Around exhibitions, performances and exhibitions will revolve a system open to training for local schools and foreign ones, residences for artists and artisans, and thematic workshops.
A media library will host industry documents, filmographies and biographies, and a bookshop open to the public will fill the Roman void regarding fashion and design publishing.

Among the objectives of ROMAISON, is to build an archive of new materials and to create collaborations with experimenters to ensure that there is a strong research component going into the future, in addition to the study of the past.