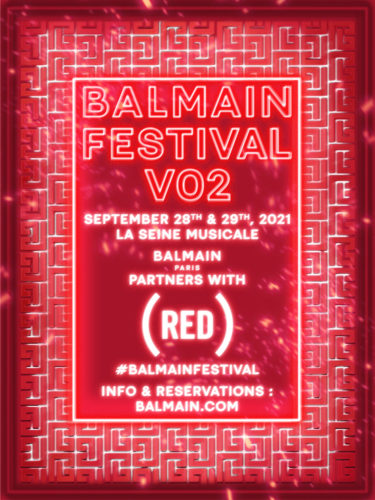 “I’m often asked to explain why music plays such an importance in my collections. I usually reply that it just reflects how I grew up—since the two were so intertwined during my youth, I can’t really envision one art without a good helping of the other. And that’s why every single step that my team and I take as we develop our many collections—from initial designs to final campaign shooting—is always accompanied by a loud, inspiring soundtrack.

And, since I’m French, I do feel an obligation to add the inevitable Proust reference… For me, music often functions just like his famous madeleine: it just takes a series of notes to trigger an avalanche of thoughts, inspirations and memories. That’s why it is impossible for me to imagine a creative moment or inspiration without thinking of its accompanying music.

So, two years ago, that dedication to music pushed me and my team to bring it to whole new level. In 2019, we created a special Balmain moment that was as much concert as runway, when we decided to present the house’s men’s collection during Paris’ annual all-night music celebration, la Fête de la Musique. We built an ephemeral festival site inside the French capital’s beautiful Jardin des Plantes and mixed our models with some fantastic performances from some of my favorite international artists. 1,500 free tickets were available to those who wanted to join us. And donations from those guests, as well as the proceeds from the sales of limited-edition Balmain festival merchandise and food and drink offerings were donated to help (RED) and the Global Fund in their fight to end AIDS during our lifetime.

I loved every minute of it—and all I could think about the next morning was how eager I was to start working on our next music festival.

Now, finally, we do have the chance to reunite and experience once again the melding together of the beauty of friendship, the power of music and the excitement of a Paris runway. That’s why I am so happy to announce our upcoming Second Balmain Music Festival. It will take place on the 28th and 29th of September, at one of Paris’ best music venues: La Seine Musicale. Just as in 2019, our stage will present a mix of musical and fashion creations. The surrounding ephemeral festival village will be filled with food trucks, bars and merchandise stands. Please see the notes below for more details.” Olivier Rousteing

Reflecting this house’s commitment to democratize and modernize fashion, we plan to more than double the number of Balmain Army members who can attend the next Balmain Festival. In 2019, we were only able to offer 1,500 free tickets—but for 2021, we plan on admitting up to 3,400 guests to our music-filled runway.

The first 1,200 of those who pledge a minimum donation to support the work of our partners (RED) and the Global Fund will receive two tickets for the Balmain show and concerts taking place on the main festival night, September 29th. Since this year marks the 15th anniversary of (RED), we’re asking for a minimum donation of 15€, for each pair of tickets. Of course, 100% of each guest’s donation will be dedicated to (RED)’s fight against pandemics. Proceeds from the sales of limited-edition Balmain festival merchandise, as well as from the village’s food and drink offerings, will also be donated in support of those important goals. Please see the notes below for more details on tickets and donations.

Please note that on the first night of the Balmain Festival, September 28th, entry to the festival village will be free and open to all.

The list of partners helping Balmain make this special celebration possible includes, among others, Live Nation, Chivas, Balmain Hair, and—of course—(RED), the nonprofit organization that raises critical awareness and funds for the Global Fund to fight AIDS, and now, COVID-19.

Everyone at Balmain is proud of this house’s long history of partnering with (RED) on a series of projects and products over the years, in order to help raise needed monies for the essential work of the Global Fund. The upcoming Balmain Festival reflects our strong devotion to that good fight.

You can keep track of updates about the festival at balmain.com and instagram.com/Balmain.

The one-of-a-kind Balmain Festival is an annual celebration mixing the best in food, music and fashion. This year’s festivities will be taking place at The Seine Musicale, over two evenings during the upcoming Paris Fashion Week—on September 28th and 29th, from 5pm to 11pm, each evening. The festival’s ephemeral village will be filled with stands offering limited-edition Balmain merchandise, as well as food and drink from France’s best chefs and suppliers. For all updates on the upcoming festival’s food, music and fashion, keep checking Balmain.com and instagram.com/Balmain.

Supporting (RED) and The Global Fund

In addition to celebrating friendship, fashion and music, The Balmain Festival once again aims to raise funds in support of the important work of (RED) and the Global Fund. For fifteen years, (RED) has been working closely with partners like Balmain, to help finance the Global Fund’s essential, life-saving work to end AIDS in our lifetimes.

Balmain is proud of its long history of support for the Global Fund. The house has collaborated with (RED) on multiple projects and products over the years to help raise needed monies for the Global Fund in the fight against HIV/AIDS. With new HIV infections and AIDS-related deaths on the decline, and more people accessing life-saving treatment than ever before, the Global Fund has been critical to the incredible progress that’s been made over the past two decades.

However, the emergence of COVID-19 puts this hard-won progress in jeopardy. If we do not get urgent funding and resources to the countries that need it most, we may lose out on years of gains made in the AIDS fight. The impact of COVID-19 on health programs could result in an increase in AIDS-related deaths and new HIV infections, as health and community systems are overwhelmed, treatment and prevention programs are disrupted, and resources are diverted.

Recognizing that global pandemics demand global responses, Balmain knows that now is the time to join together with partners like (RED) and the Global Fund to fight harder than ever before, in order to strengthen health systems and protect this hard-won progress. That is why all proceeds from all Balmain Festival Village sales of food, drink and Balmain merchandise will be pledged in support of (RED) and the Global Fund to fight pandemics. And that is why we are asking guests that attend the festival to also pledge to support our partners.

Tickets to the Second Night of The Balmain Festival

On the second night of the Balmain Festival, September 29th, Olivier Rousteing will show his latest collections, with Balmain models making their way down the runway as some of Rousteing’s favorite artists perform.

Reflecting this house’s strong belief in the need to democratize and modernize fashion, Balmain itself will not be charging admission for that special night. Therefore, the first 1,200 of those who pledge a minimum donation of 15€ in support the work of our partners (RED) and the Global Fund will receive two tickets for the Balmain show and concerts taking place on the main festival night, September 29th.

Since this year marks the 15th anniversary of (RED), we are asking for a minimum donation of 15€, for each pair of tickets (donations in excess of 15€ minimum for (RED) are, of course, highly encouraged!).

Ticketing will begin on June 21st at 5pm CET. Each of the first 1,200 guests who pledge the minimum 15€ donation amount to (RED) will receive an e-mail with a unique and dedicated special code, which can then be used to reserve entrance to the festival for the evening of September 29th.

Each guest’s donation will be 100% dedicated to (RED) and the Global Fund’s fight against AIDS and COVID-19.

Proceeds from the sales of limited-edition Balmain festival merchandise, as well as from the village’s food and drink offerings, will also be donated in support of those important fights.

About Balmain
More than 75 years ago, when Pierre Balmain first introduced his “New French Style,” it immediately became clear to all that his eponymous house was offering a distinctly fresh, bold and feminine conception of haute couture, one which broke with many of the well-established conventions of the era. His audaciousness paid off. Pierre Balmain became one of the handful of young French talents who ushered in the mid-century’s golden age of couture and helped to re-establish Paris as the world’s fashion capital. For more than ten years, Balmain’s Creative Director, Olivier Rousteing, has been inventively building upon Pierre Balmain’s extraordinary legacy, while always remaining true to his own determination to design clothes that reflect the way his inclusive, powerful and global Balmain Army wishes to live today. The result is a unique and instantly recognizable Balmain silhouette, style and attitude that highlights the singular craftsmanship of the house’s celebrated ateliers, while consistently referencing a rich Parisian heritage.

(RED), named for the color of emergency, was founded by Bono and Bobby Shriver in 2006 to turn companies into a cavalry to fight the AIDS pandemic. Today, that cavalry is also fighting the urgent nthreat of COVID and its devastating impact on the world’s most vulnerable communities, answering the need for a truly global response. (RED) partners with the most iconic brands and people to create (RED) products and experiences — all of which raise money for the Global Fund, one of the world’s largest funders of global health. (RED) partners include: Amazon, Apple, Balmain, Bank of America, Beats by Dr. Dre, Buffalo Games, Calm, Claro, Durex, eos, Girl Skateboards, Louis Vuitton, Mavin Records, Montblanc, NTWRK, Primark, Salesforce, Starbucks, Telcel, Therabody, TRUFF, U-Mask and Vespa. (RED) Supporters include: Merck and Roche. To date, (RED) has generated more than $650 million for the Global Fund, helping more than 220 million people. The money raised by (RED)’s partners and campaigns goes directly to strengthen health systems and support life-saving programs in the communities where pandemics hit hardest.