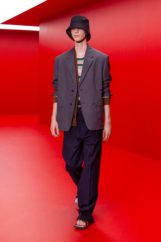 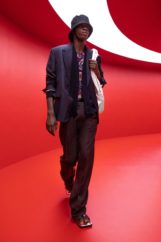 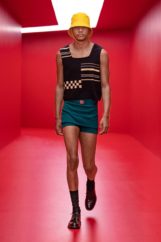 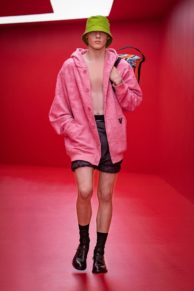 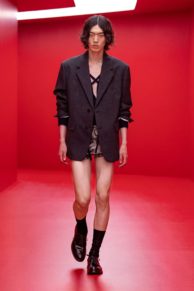 For SpringSummer 2022, the Italian luxury-house Prada offered a nostalgic youthful summer. With a red tunnel leading to the beautiful beaches of Sardinia, Miuccia Prada and Raf Simons channeled a transition from a life indoors with the pandemic to an outdoors reality, guiding the models to an infinite horizon, re-connecting with nature and finding joy in simplicity.

“The primary feeling is one of joy. It’s almost like that memory of a child, the joy of a child going to the beach. The simplest and most honest of pleasures. In all its simpleness, it’s also something very meaningful and timeless.” explained Raf Simons in the shownotes.

Though the collection was simple and light, there were several highlights which caught everybody’s attention; innovative men’s “skorts” stole the show, bucket hats decorated with the iconic Prada triangles featured cut-outs to place your sunglasses, men’s rompers with curled hems were decorated with sea-centric prints, double-waisted pants were loosely fit with eccentric colors peaking under. Playing with the juxtaposition of construction and freedom, the creative directors searched for a balance by teaming up tailored blazers, worn-in leather jackets, simple trenches with skorts, colorful tank-tops and floral-hoodies.

“The world is so complicated — so overcomplicated — we can lose the essence of human life. This is an idea I have been interested in for a number of seasons, and which we have been exploring in different ways. We come from previous collections that were all about technicality, machines, that reflect the necessity of technology. Now, we are thinking of the opposite. Human, real. Our interest in technology came from its place as a communication tool for humanity. But this expression is much more direct.” Prada said in the shownotes.

As the short film took us from the “tunnel to joy” and led its ways to the crystal clear waters of Sardinia, this was a portrayal of life turning back to normal and the summer escape we all need.