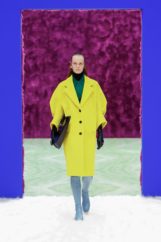 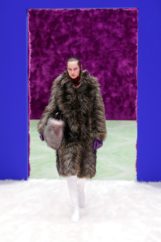 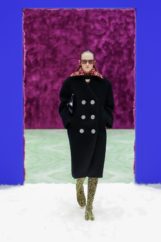 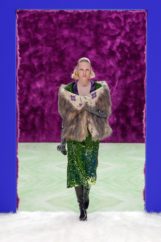 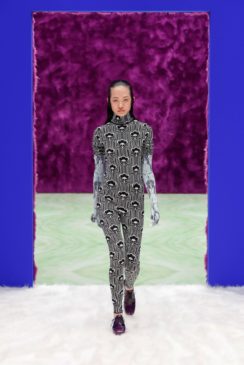 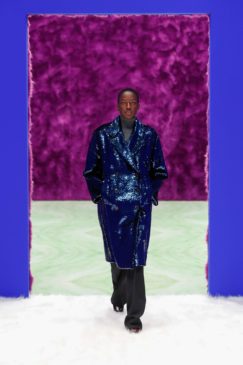 Raf Simons and Miuccia Prada unveiled their 3rd collaborative collection for Prada, revealing that for Fall/Winter21 season the designers focused on exploring the possibilities, “A fusion between disparate themes and intents mirrors the nature of humanity: a belief in the fact that men and women each hold the masculine and feminine within themselves. This collection explores the space that exists between conventional polar opposites – the point between simplicity and complexity, elegance and practicality, limitation and release, transmuted.” read the shownotes.

The emphasis of the season was the fusion of contrasting elements. Hard, constructed, one-tone garments matched with psychedelic prints, faux furs and sequins. A collection featuring bold faux furs coats to get lost in, second-skin tops with gloves creating an out of touch feeling and tightly grasped off-shoulder jackets exposing the sparkling sequins underneath. The prints and colours revealed themselves delicately beneath the oversized silhouettes. Like hidden gems displaying their beauty with each layer of clothing. It was clear from the gestures of the models that some garments were designed not just to be worn in, but also to create elegant movements and graceful body language for the wearer.

The runway was followed by a conversation moderated by Derek Blasberg featuring Raf and Miuccia, as well as designer Marc Jacobs, writer and producer Lee Daniels, writer Rem Koolhaas, musician Richie Hawtin, actress Hunter Schafer. This was the third Q&A for Raf and Miuccia where they have an open conversation about their opinions on the fashion industry, their sources of inspiration, education and changes in society… As we are all hungry for intimacy during these times, the Q&A comes as a smart initiative for the designers to connect with their audience online. The conversations create a democratic environment, feels personal and makes the designers seem more approachable.

If there will be a crowned winner for the Milan Fashion Week, Prada definitely placed itself on the top of the list. This was one of the most interesting and fresh collections so far which captured the youth spirit. A clear indication that both designers are getting more comfortable working with each other.