Special guest appearance by Hannah Peel Lyrics by Henry Darger Philippe Cohen Solal & Mike Lindsay present OUTSIDER – album available February 5th 2021 Outsider art, the Anglo-Saxon equivalent of art brut theorized by Jean Dubuffet, is the fruit of self-taught creators who have been marginalized by poverty, madness or the accidents of life. Their work is born on the fringes of artistic circles. The one developed throughout his life (1892-1973) by Henry Darger was not discovered until after his death, in the stuff of a room he occupied at 851 Webster Avenue in Chicago: an epic novel of 15,000 pages and more than 300 large-format paintings which are its variation. Mixed media, decals and collages, are used to evoke an endless war on an imaginary planet, unleashed by the rebellion of children held in slavery, led by the “Vivian Girls”. A corpus nourished by obsessions, a deep religiosity and a shocked history (a childhood spent in a sordid orphanage and a relatively lonely life), discovered in 1973 by Nathan and Kiyoko Lerner, the owners of the apartment rented by Darger. A work that the couple will bring to the attention of the world and which will find an important echo in the art world.

Tonight at 6 PM CET on Club House join Philippe Cohen Solal for a chat about the Outsider Artist Henry Darger that wrote the lyrics to this piece. 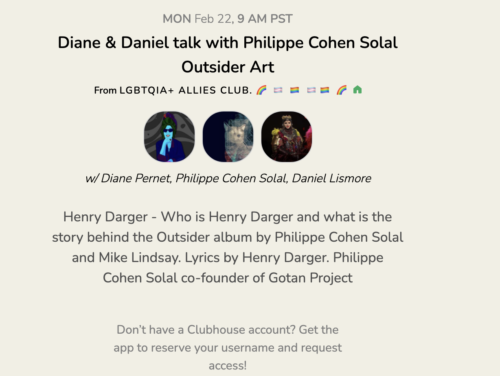