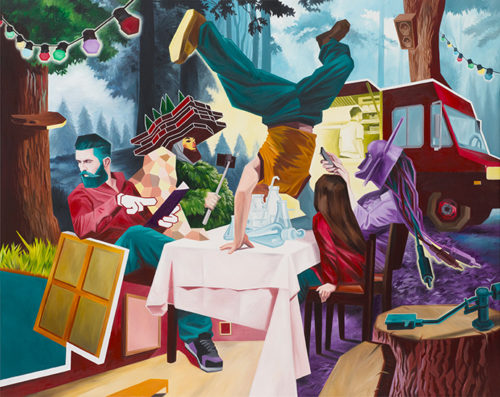 For his first exhibition at Galerie Suzanne Tarasieve, Kriki presents a new set of oil-on-canvas paintings and color drawings. The title of the exhibition, “Médiase,” is a contraction of the words media and Medusa. This name evokes the anxiety-provoking action of television news, and also refers to the ancient goddess, also known as Gorgo, with her petrifying gaze. In the painting that bears this title, Kriki paints “Médiase” as a gigantic blue jellyfish, washed up on the beach, its head formed of televisions and surmounted by tentacles of connecting cables: for it is indeed the media that spread fear. Conflicts in the Middle East, deforestation, or the peoples represented in the painting Plastik serve as a subject for the artist, while other, more intimate scenes refer to his punk attitude or to his role as a painter in society. Kriki’s painting requires a closer look, as it embodies a rhizomic thought that works by concatenation: from the global to the intimate, from the sensitive to the subtle. These hyper-constructed paintings, whose composition is carefully elaborated by the artist on a computer before they are created with paint, are populated by emblematic allegorical figures, like the inverted figure of a hip hop dancer, a punk hipster with a green beard, here an angular man evoking the anonymity of television mosaics, or even leaf-men, fiber-men, wearing recycled masks, borrowed from African ethnic groups. There’s also “Shêdu,” the bull with a human torso, from the painting Syrian, and let’s not forget FUZZ, a famous figure invented by the artist in the 1980s. Some objects also appear recurrently In Kriki’s paintings, such as tree trunks, dendrochronological metaphors that allow us to listen to the silence of nature. Cables, symbols of an over-connected world, snake here and there among books skewered like kebabs, a sign of a fast-culture to be consumed on the go.

The world depicted by Kriki appears to us as a waking dream, sociological and squeaky, of a captivating and rather positive density. Richard Leydier