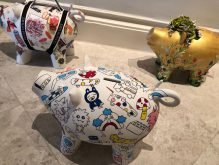 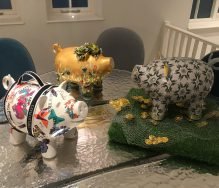 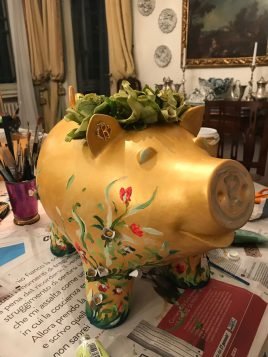 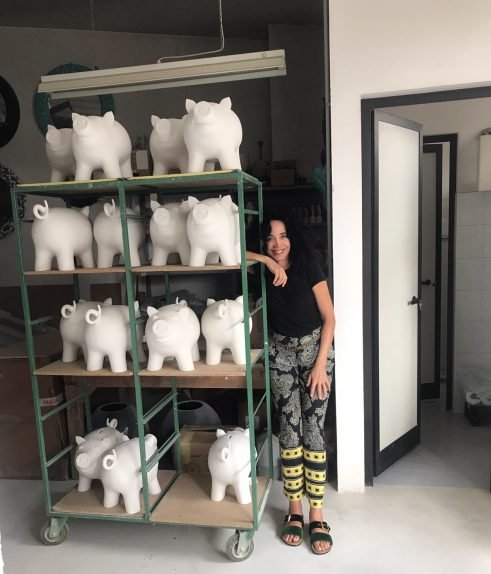 The other day I was invited to lunch with the French Lebanese artist and painter Mouna Rebeiz to hear about her piggy bank project for the charity Innocence in Danger. Before we settled onto that project Rebeiz passionately discussed her «Trash-ic  or  trash  in  the  face  of  beauty» exhibition (Saatchi Gallery, June 1st  to June 3rd). What impressed me the most by the images she showed us of The Trash-IC project was the way that she rendered the skin using the same techniques of the Great Masters. Although she chooses to destroy the beauty of her own paintings, I rather preferred them left untouched. Rebeiz took courses in patinas in Paris on the Renaissance, from the expertise of Abraham Pincas, painter and head of the Painting and Techniques Atelier at the École Nationale Supérieure des Beaux-Arts in Paris as well as courses from the great Lebanese painter, Mohamed el Rawas, her professor at the Institute of Fine Arts in Beirut.

The show at the Saatchi Gallery in London will be her second solo show in London and consists of 17 works, some of which include digital and melodic installations.

Creating to comprehend… creating to pierce the mystery of a world in which we can feel alien, displaced. Creating to understand the intentional refusal of the aesthetically pleasing, and decadence and obscenity raised as new norms. Creating to truthfully re ect the sad decline of the human relation. Creating to resist. To continue to be. To exist, (h)ic et nunc. Creating, that trash may also be chic.

And so it is that trash and beauty generate/nourish each other, coexisting in the face of controversy and drawing their respective matrixes from a society in search of new points of reference. One no longer exists without the other.
Without scandal, there can be no history of art… but still…” said Rebeiz.

In order to support the Innocence in Danger charity Rebeiz has asked a selected few internationally renowned Designers and Artists to apply their individual creative energies and produce unique and precious objects from ceramic piggy-banks* molded in the furnaces of Nove di Bassano in Italy. Following this each piggy bank will be auctioned by Sotheby’s on the opening night of the exhibition.”

All proceeds from the piggy banks will go towards the charity, a world movement for the protection of children against all forms of sexual abuse. This will enable the event to reach beyond the exhibition hall into dark areas of life and bring hope. Innocence in Danger UK is part of an international child protection organisation registered in the UK two years ago as a non profit. The goal of Innocence in Danger is to identify, rescue, support and accompany victims of sexual abuse and exploitation.

The exhibition will be open from the  June 1st to June 3rd, 10am to 6pm with free entry. Select piggy banks and a complete list of participants will be available to online bidders.