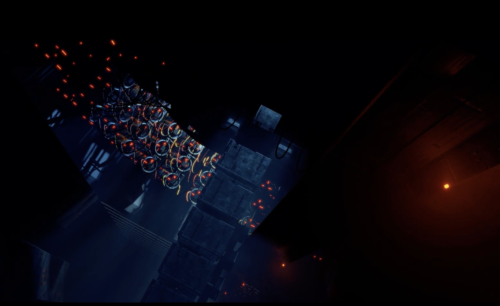 DP: How did it all start for you? Did you always want to work in film and animation?

MY: I’ve always been interested in the science fiction genre, and I think that was the interest that brought me to love cinema. My earliest memories of ever watching a movie was Star Wars A New Hope as a child. From that point on, science fiction films have captured my imagination. Blade Runner (the original and Denis Villeneuve’s sequel), Alien, Apocalypse Now, Paris Texas, In The Mood for Love, and studying Roger Deakins cinematography has continually inspired me and shaped the way I look at film-making in general.

While I love film and animation, I didn’t initially know that I wanted to pursue my career in that direction. I originally pursued architecture having completed my Undergrad and Masters degree in that field. I think that my training as an architect has actually increased my passion for film – so much of the built environment is “designed” to some degree. Making architecture is one thing – and representing those spaces is a different art. I often found myself wanting to better represent architectural spaces, and that conventional 2D drawings were not enough for me. 3D visualization became that next step in telling better stories, and then naturally 3D animation followed. Having completed my thesis which relied on animation and film, it has really ignited my passion to work in the film industry.

DP: What and when was the first film that you created?

MY: I am actually quite new to making films. The first film I ever made was a short 5 minute film documenting the spaces in the School of Architecture which I studied in. It was done last September as a case study to begin to think about how the camera conceptually frames space and time. My short film “Shotengai” was the first real film I made! I tried to be quite rigorous with creating “Shotengai” as far as the process, storyboards, set design, pre-viz, etc were all important processes in creating the film.

I think all science fiction narratives are generally exaggerations of a current situation of when they were made. Shotengai is no different. I was interested in what space and architecture would become, and how they would be (dis)connected in the future. Many might say we are living in a post-anthropocentric world. Human kind has altered this planet to an almost irreversible extent through the use of technology. Architecture is not being built for humans anymore, it’s being built for human-less data centers, server warehouses, amazon storage facilities. What would space, city, and technology look like 80 years from now? This was the question that “Shotengai” attempts to address.

DP: Do you have any particular authors that have inspired you?

MY: I am currently reading William Gibson’s Neuromancer. I am also a big fan of JRR Tolkien – I read The Hobbit at a very young age and was fascinated by how vibrant of a world he created through that narrative. It was so epic when I first read it – and it still is.

DP: How does the creative process work for you?

MY: The creative process for me varies depending on what I am creating. One thing that does remain constant, is referencing cinema. I always gather a mood board of movie stills, and try to understand why a particular image is powerful and beautiful within the context of the film’s story. I try to understand how the image and framing of the shot improve and impact the narrative as a whole. When I create my own work, this is the primary framework that I try to focus on – how can this image better tell a story.

DP: Can you talk a little about the static voice over and why you made that choice?

MY: The voice over of the lone character acted as not only a narrator but also to expand the “Shotengai” universe. The whole idea behind the voice was that Takaharu (the fictional lone character) created “voice diaries”, and that the one you hear narrating the film was an old play-back of one of these “diaries” he made. Having the narrator talk about his past, and just what it feels like to live in that world I felt was a powerful way to develop a sense of empathy with the viewer. Combining the 2 forms of media was also informed by this idea of empathy. While the viewer is presented with this future world, that “fictional world” collides and transitions into reality. At the end of the film, the animation seamlessly transitions into the computer screen which is playing footage of space in today’s world. This plays on the idea which I mentioned earlier of science fiction narrative exaggerating on what actually exists today.

The whole journey of creating Shotengai was definitely challenging but extremely rewarding on a personal level. I had always wanted to direct and create my own sci-fi short, so the entire process itself was very enjoyable – everything which you see is really just a culmination of my past experiences and passions. The process of creating the film was such a joy!