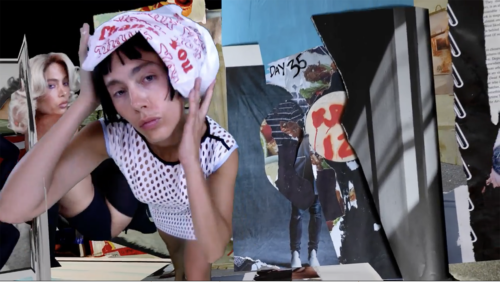 The work of illustrator and filmmaker Quentin Jones has quickly become the envy of the fashion industry as her creative projects for Vogue, Chanel, Carolina Herrera and more have a rich and distinctive character that demands repeat viewing. Jones’ latest personal project, It Was Fine, is a playful riot of layered visuals and kinetic experimentation that feeds the ‘infinite scroll’ demon in all of us. Forged in the creative fires of the global lockdown, and harnessing collage, photomontage, diegetic sound, and animation, It Was Fine is a veritable gesamtkunstwerk for the digital age.

Embracing the sartorial themes commonly found in her commercial work, Jones takes visual queues from high fashion and turns it on its head—poking fun at the incongruity of the real and projected image on social media.

“The sound design and monologue is juxtaposed to what you see on screen,” says Jones, describing the dichotomies in her work. “For instance, cliché social media wellness mantras are set against a depiction of someone smashing through their own face; or ‘inner peace’ coming out of an ass. I wanted it all to be a bit funny because that is one thing we all have left—our humor.”

Filmed, directed, edited and animated by Jones, It Was Fine plays out like a feverish stream of consciousness as she glams up, strikes a pose and eventually devours herself to comedic effect. “The main things that inspired my ideas were from collages or paintings,” says Jones. “I was thinking about how you would interpret a 2D collage if there was a way to dive through layers of artwork; dissecting what would be possible if, for example, Hannah Hoch had 3D animation.”

“This film came about in response to the lack of control that was thrust upon me, and the rest of the world, this year,” says Jones. “We have all been isolating and have had to understand who we are away from our networks. I had to use the time to do something freeing and experimental.”