The theme of the day was unexpected disenchantment for all fashion fans on March 27th 2020 when the decision was made to cancel the most prestigious fashion week in the world– Paris. This has now transmuted Fédération de la Haute Couture et de la Mode into a digital reconciliation.

With their complete calendar, newcomer engagement included, fashion won’t let you down. Expect the few absentees to pair men with September’s women’s shows. And the outcome? Discovering new names through the Fédération is fully possible with the upgrading corpus of videos that are accompanied with interviews and exclusive entertainment that lends itself towards an intimacy and a season that feels more collectable than ever before. The main question now is whether this new breeze of youth combined with the existing contemporaries makes a stable family tree possible. Regardless, posterior success shouldn’t be measured on the viewers’ “Ooooooohs!” (though there were thousands) but on its existence. Digital fashion week has been born, generating with it a positive landscape full of endless possibilities to last more than one week.

Can you imagine a new edition without being digitalized?

The same authoritarian freedom that powers the world nowadays, constantly resetting our times and adjusting injustices (listen to Botter’s supreme talking here), can be found on the platform fhcm.paris without the divisiveness. Though there were no circulating models, buyers, or press at this market in Paris, the garments there were successfully exposed next to all indispensable tools necessary to continue writing fashion’s narrative (dependant now on professionals to leave the traditional system by the wayside, requesting and utilizing the necessary tools). Excitement begins while waiting and watching the scheduled short videos online is step one. This is followed by countless other steps, such as visiting the designer’s sites and platforms, which offer instant collections that contribute to frame and maximize the potential of each collection. Not at all exhausting, this year’s fashion week felt much more like an indoors pajama partying while dreaming about the outdoors for next summer. Fashion’s navigation was simple and lots of fun!

There was significant focus on detail in general, with plenty of time to discover every little thing and fully inspect products, even when video artists had encrypted them (please note– all videos are available to watch and pause when needed, servez-vous!). It felt more sincere to shift between the Fédération’s site and runway apps than running disoriented throughout the live calendar Paris usually presents us with, generally overbooked. The gap between shows, or videos, was filled with precious moments for recapitulation, as though meditating alongside these new formats while waiting for the next one to begin. Straying away from the usual overrated, digital wave that is normally generated by us carrying on like robots, without thinking, stopping only on occasion to observe the artwork properly and reenter the social channels with the right school of thoughts. It totally worked out this time!

The now esteemed Paris Digital Fashion Week is the one to collect in history.

Despite everything, I found myself melancholic when the last show was about to begin. The emotion delivered by Lemaire combined with his sandy colors and granulated dessins was, indeed, a sign of the final FINALE and self-participation, the satisfaction tangible even though we were spread all around the world.

Rick Owens, his own fitting show with his own model, was pure merrymaking. Each moment created under his hands and from Y/Project’s Glenn Martens were genius, both masters of the spectacle who have been reimagining the idea behind showing collections in Paris for some time now. Without them and Comme des Garçons timeless conceptualism on anarchist runways, we wouldn’t be able to call Paris a fashion week. We can’t wait to see them again soon!

You only need a few of the major ones to get the flexibility, while others will perform perfectly as scheduled, highlighted here for you all!

By delivering amorous affairs door-to-door, a busy bear with hand-knitted skin provokes us all to grab a sewing machine and get in on the action. The result: an entire collection signed by Japanese street-wear brand Doublet under the creative direction of Masayuki Ino and produced by the adorable creature himself (kawai, isn’t it?). This brings up the question of whether Christmas can only be celebrated during winter, or if we can gift this sweetness to each other anytime. Watch the full video here.

The gyratory amusement park effect in Kolor’s lookbook is the ultimate tool we needed for having fun when indoors. While the filming appears improvised by naughty and clever kids in lockdown, when combined with multiple sharp collage techniques applied on garments, endless beauty is created. It truly shakes us after so many months of immobility. The blue tumble mat detail of a sweet square supporting the rolling collection belongs to the brand’s DNA. Seen at the Tokyo flagship store and in runways, this was a call for us all to perform artistic gymnastics. Clothes worth flying for! Watch the full video here.

Super awesome the Kid’s stop-motion film! The clever showcase shown at the Fédération site and produced in New York, comradeships their debut during digital fashion week. “Everything’s Fake Until It’s Real” was their daily aphorism for this Brooklyn based studio when designing for Barbie’s. Well, all doll’s faces went under surgical manipulation (models and public) similar to the miniature garments; with UNPARALLELED results. Models from left to right: soccer legend Pele, Stephen Hawking and Freddie Mercury. Watch the full video here. 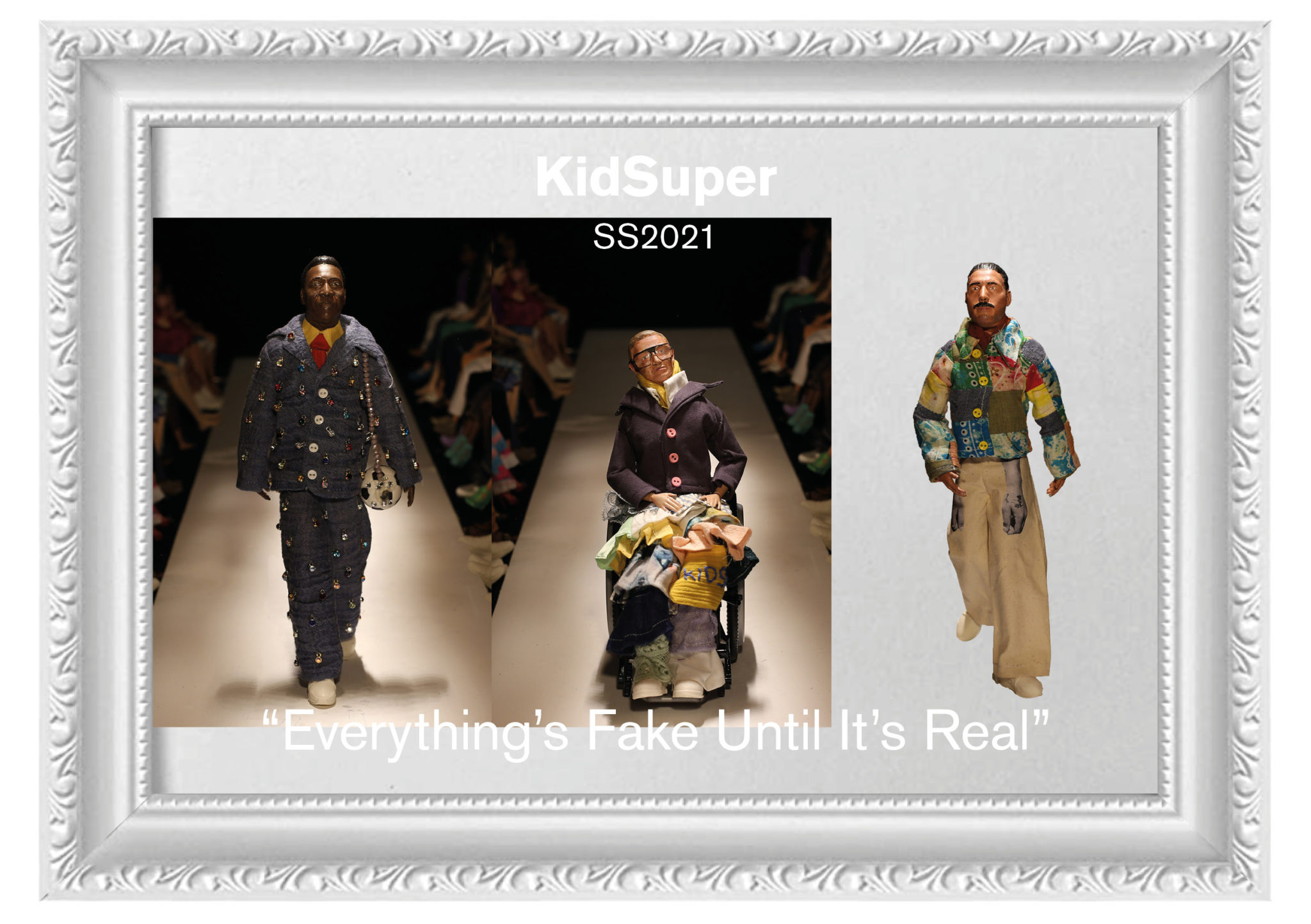 GmbH’s manners are incomparable when it comes to humanitarian values in fashion. From the start, they have been able to coat their signature products with a thick layer of human rights, rapidly shaping the brand into an institute where discrimination doesn’t go unnoticed. ‘Season of Migration to the North’ is the newest film to transport their foundation and ideology. Artist Lars Laumann closed the cycle of three films for Spring-Summer 2021. This time he collaborated with Sudanese activist Eddie Esmail, whose voice-diary tells how social rights are often castrated by ignorant regimes. Leaving aside the primitive principle of people enjoying a fashion show for a moment, escaping the collective emotions. Watch the 17’ trip to audio and beauty here. 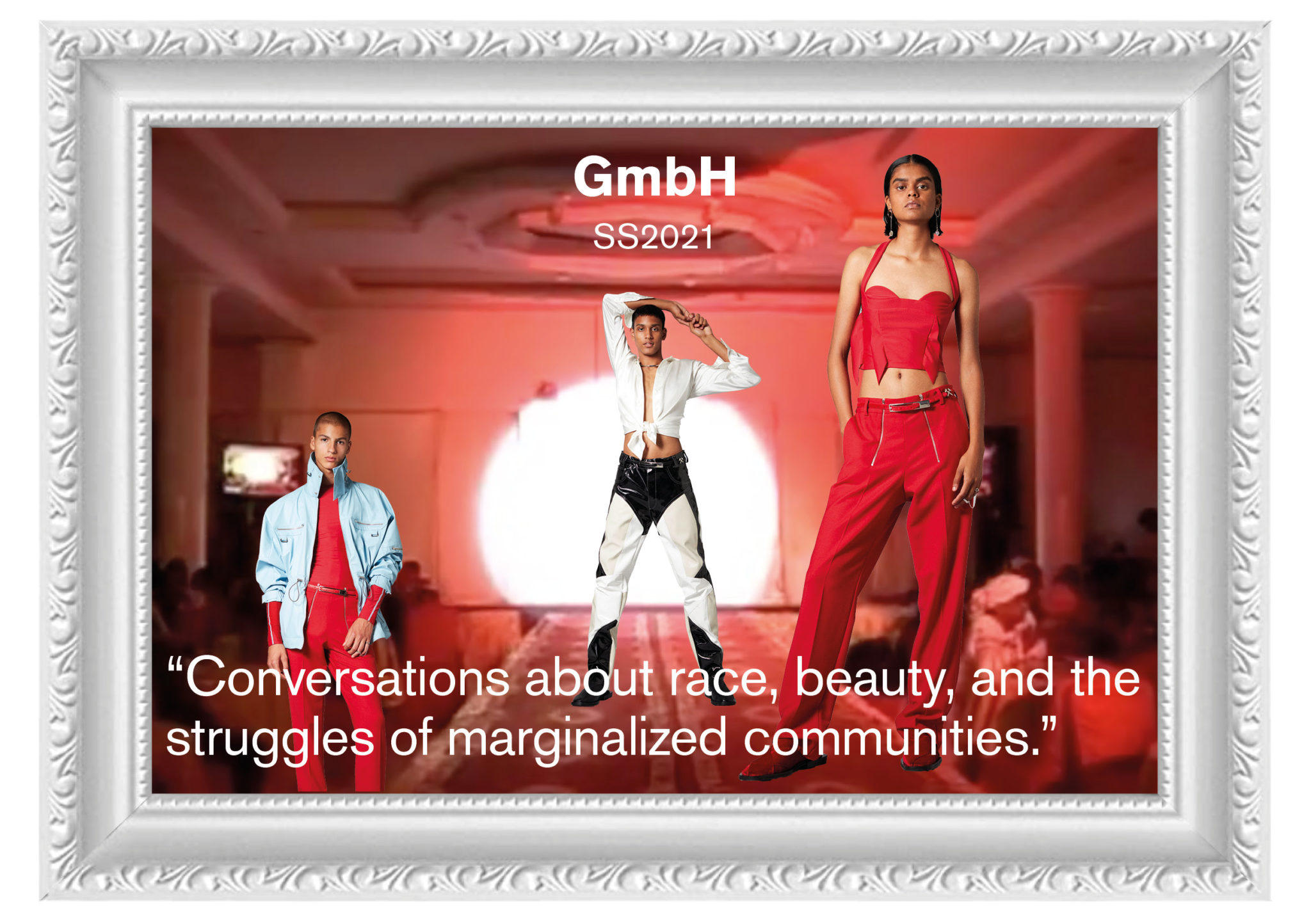 Wonderful news: by shifting its entire approach, a population of disobedient Muppets takes over the fashion week system and brings a better tempo when attending shows. In the comedy sketch designer Mihara Yasuhiro recreates, there’s no need to gallop through to the end, only a call to relax and enjoy from the beginning. Entertainment and audacity in design characterize this Tokyo Maison, repurposing design for more than two decades. The crossing of genres, from a physical show to watching on the sofa at home, seems like the perfect simulacrum for broadcasting upcoming fashion. Watch the full video here. 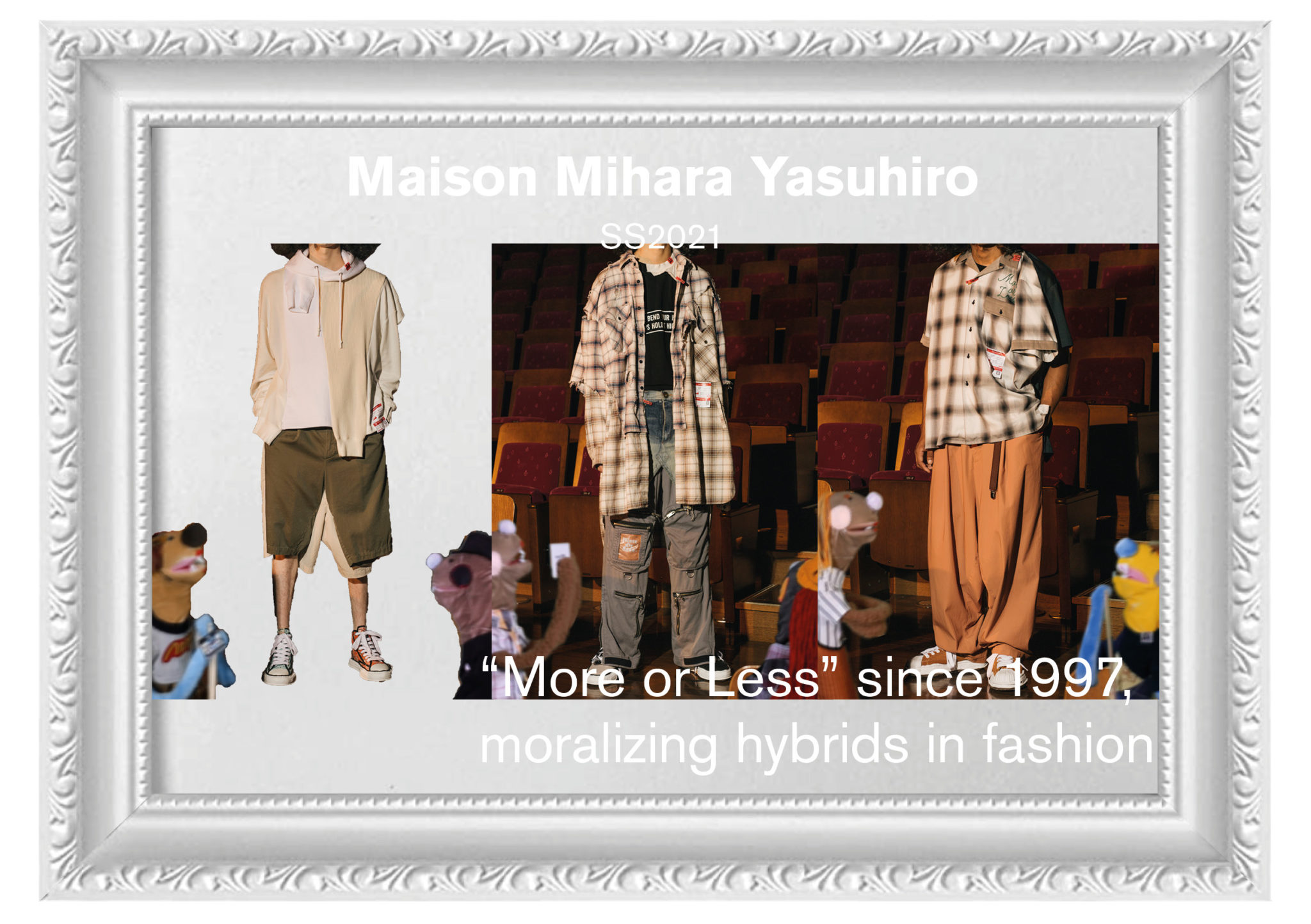 Why was London calling Paris on 10.07 at 1pm? Please answer the phone, and allow yourself to flirt with the Kingdom because Kiko Kostadinov is skipping unadorned into next Spring-Summer. No digital show felt more private than his (you needed a code to enter the screening), composing a short film by Robi Rodriguez and twenty-seven looks were sufficient to feel involved in a 15th-16th century exclusivity. Monotony was not in Kiko’s agenda, instead the usual twist we all desire in order to avoid boredom on the streets wearing unique and futuristic garments. Watch the full video here. 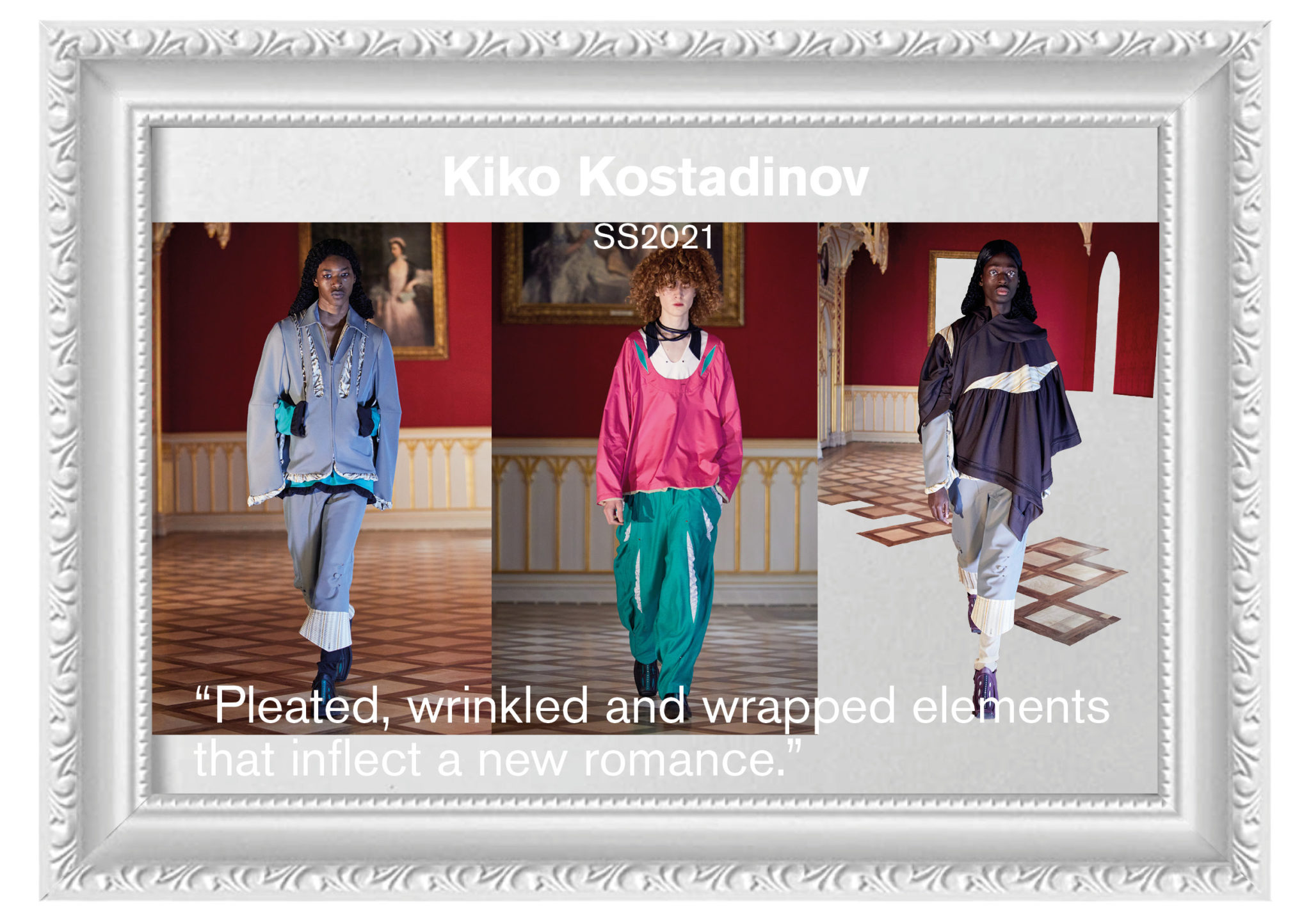 A digitalized community of monks transformed into new powers brings the revolution. The fantasy behind it is no more than a provocation to decrease the existing systems into a more positive universe. Not strictly sober but beautifully severe, the use of colors and tailored sportswear represents how this Parisian designer creates his own fountain of beauty even though we are all aware of its temporary absence. Expect protection vests labeled with Tarot divinations, a familiar spirituality behind Boramy’s work that has climbed to a level of pairing him next to the most promising French designers. Watch the full video here. 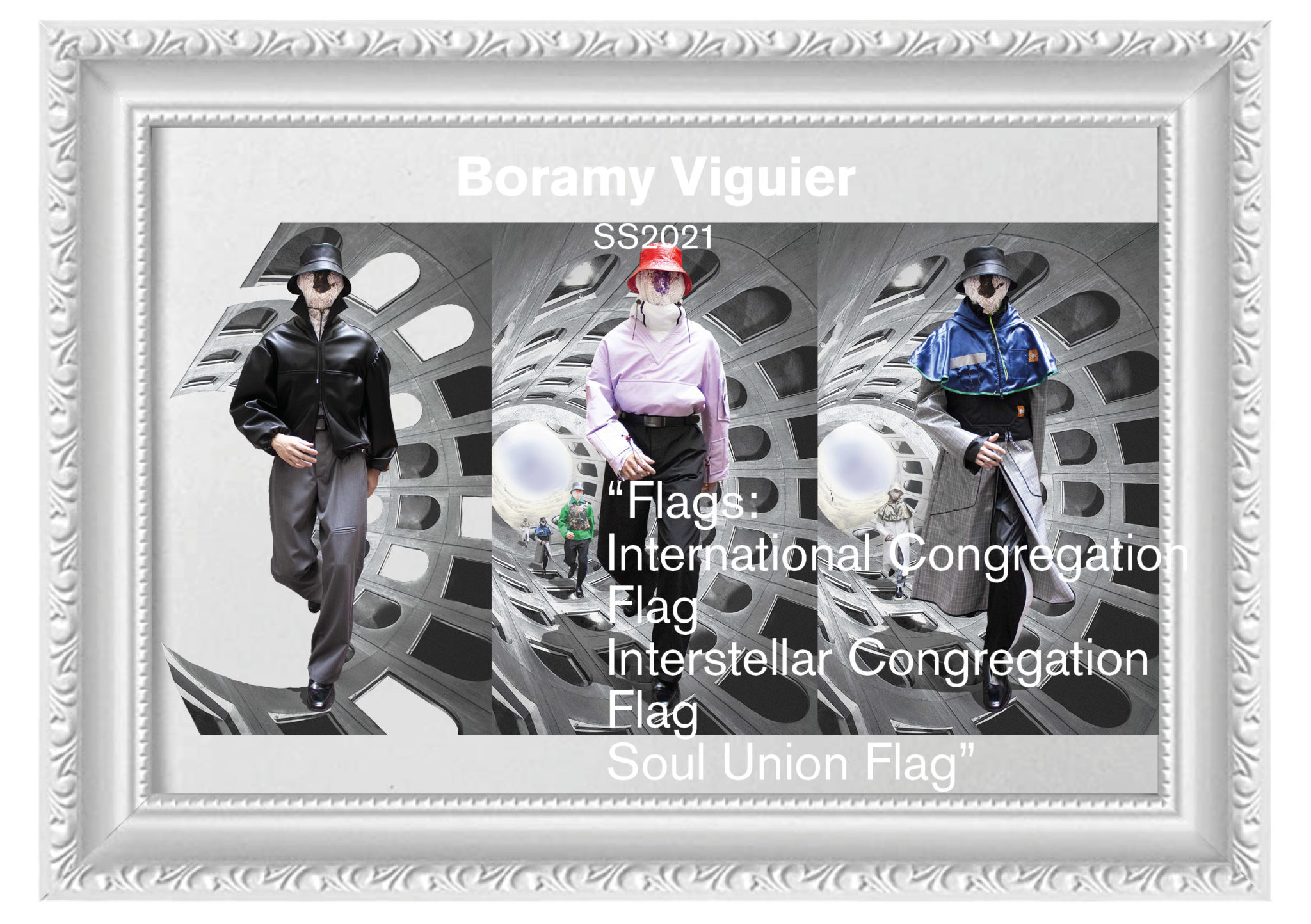 One verdict is, all those documented in this digital calendar were so important as all traditional houses– there was no differentiation played this season at all. The new role that some designers’ gift gave us was extraordinary, we were granted full access to their Spring-Summer 2021 thoughts without any intermediaries. Hearing or visualizing an imagined future guided by the creator’s own voice felt as though the protection we search for in our own habitats was transferred to the clothes we seek to wear.  On the top luxury side, Kris van Assche’s partnership with ceramic artist Brian Rocheforte for Berluti, couldn’t make the printed silks and patinas cozier than any mi casa es su casa. Watch the full video here.