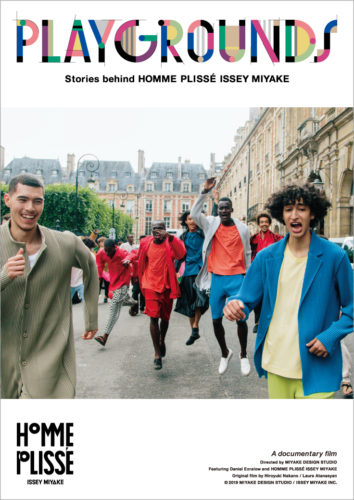 Today I was so happy to receive access to the documentary spanning 3 of the HOMME PLISSÉ ISSEY MIYAKE collections. I attended the show at Centre Pompidou and the following one at Place des Vosges. It is such a pleasure to relive the pure joy of the two events and to see the one that I missed. The documentary will be streaming until Sunday evening. Life has not been so easy for most of us these past few months and who knows what the future brings. What we do know is that the positive energy that is emblematic of the brand  is captured here in this documentary. Like Daniel Ezralow , the choreographer says, this is a once in a lifetime event it will not happen again. But, you can watch the doc a few times if you want..it is so full of happiness like a serene meditation.  Imagine in a crazy fashion week at the end of a super charged day, the show took place at Centre Pompidou and I even think it was even raining. At the end of the show after the models were flying through the air, the fashion crowd, not known for their laissez faire attitude,  got into the act and took to the ribbons and started flying through the air. I think this could only happen at an ISSEY MIYAKE show. The running and dancing through the park in Place des Vosges on a beautiful day was just a heavenly vision. I have never exited HOMME PLISSÉ ISSEY MIYAKE without a smile on my face. In addition, if you really want to know what goes into making these amazing shows, it is all here, extremely informative. Bravo.

The film opens with a scene from FLYING BODIES, a documentary about the performance of the Aomori University men’s rhythmic gymnastics team in 2013, which marked the launch of HOMME PLISSÉ ISSEY MIYAKE.

The story continues with the very first presentation of the line abroad in Paris in January 2019 (PLAYGROUND) and the first HOMME PLISSÉ ISSEY MIYAKE fashion show in June of the same year (A Walk in the Park).

The film includes excerpts from these performances as well as previously unseen behind-the-scenes footage to plunge the audience into the excitement and emotion of the preparation of these different events. This documentary does not fail to evoke the obstacles encountered by the choreographer Daniel Ezralow, as well as by the models and all the teams brought together to express the potential of HOMME PLISSÉ ISSEY MIYAKE’s clothing, and it shares the creative process, doubts and extreme time constraints. The choreographer’s requests quickly fled creating unexpected challenges for the performers. Daniel Ezralow encourages them to jump, run and dance, even if they are sometimes disconcerted by some of his demands, in order to present all the possibilities offered by the clothing of the HOMME PLISSÉ ISSEY MIYAKE line through real performances. The passion deployed to present these performances ends with a giant explosion of energy.