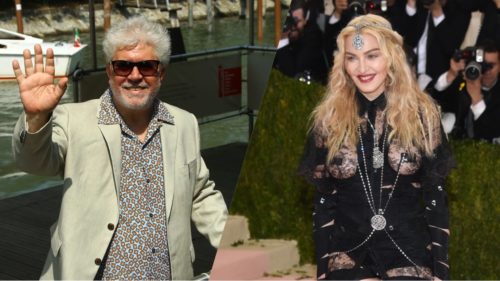 Aside from us two, and a little bit La Polaca who was divine, Madonna did not pay attention to anybody else. A member of her team was carrying a very good quality camera to film it all, “for a keepsake,” Madonna told me. It seemed strange to me, but a good host does not ask about certain things. I had to translate for Madonna some of the questions that she was greatly interested in with regard to Antonio. At that moment in his career, Antonio was about to take off like a rocket. “Tie Me Up! Tie Me Down!” had just opened in the U.S. and the critics and Hollywood (and Madonna) had fallen in love with him, but that night in 1990, he didn’t speak a word of English. I say this because a year later the film “Madonna: Truth or Dare” premiered, and a great part of it is filmed at my party at the Palace. Antonio’s harassment was one of the main storylines and she, obviously, edited in how she dispatched Ana Leza with only one sentence. At the end of the dinner, Ana dared to get close to our table and told the divine blonde sarcastically, “I see you like my husband, it doesn’t surprise me, all women like him, but I don’t mind because I am very modern.” To which Madonna replied: “Get lost.”