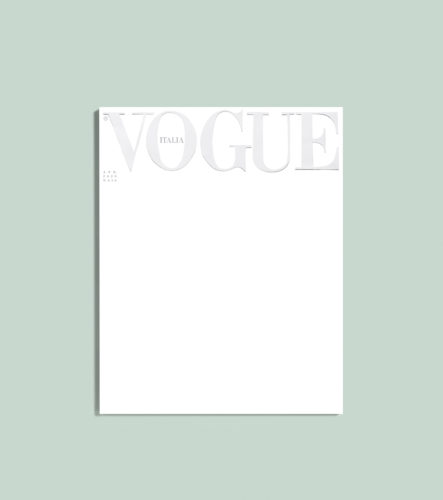 For the first time in its history, Vogue Italia is publishing a completely white cover.

“It’s a mark of respect, a blank page to be filled with imagination and creativeness. And it’s a tribute to the white coats of the doctors and nurses who are saving lives”, explains editor-in-chief Emanuele Farneti.

The magazine also contains the first portfolio of fashion under quarantine, with remotely-taken images of more than 40 leading figures in the fashion industry, including Gigi and Bella Hadid.

Milan, 8th April 2020 – Vogue is a publication whose history spans more than a hundred years and has seen wars, crises and acts of terrorism. Staying faithful to its noble tradition of not turning away, at this dramatic moment of irrevocable change for the world, Vogue Italia has decided to release a special issue, which will be in newsstands from 10th April.

To underline its respect and hope for future rebirth, the cover of the magazine will be left totally white for the first time in Vogue’s international history. Not for lack of images, but because white is many things together; it’s a blank page waiting to be written on, as the editor-in-chief explains in his editorial.

“White is, first and foremost, respect. White is rebirth, light after the darkness, the sum of all the colors. White is the uniforms of those who have saved lives while risking their own. It’s time and space for thinking. And for staying silent too. White is for people who are filling this time and space with ideas, thoughts, stories, verses, music and kindness to others. It’s a reminder that after the crisis in 1929, clothes turned white, a color chosen to express purity in the present and hope for the future. And above all, white is not surrender; it’s a blank page to be filled, the frontispiece of a new story about to begin”, says Emanuele Farneti, editor-in-chief of Vogue Italia.

The title of the event and the hashtag of the initiative is #imagine: an invitation to hope and imagination at such a difficult time.

The issue also contains the first major fashion feature of the lockdown era, created over the course of a week in several countries around the world by more than 40 artists of the Vogue Italia community (photographers, models, stylists, creative directors, make-up artists), who used seasonal garments or their own personal collections to create images of themselves, their families or distant friends via internet.

“It’s effectively the first photoshoot published by a fashion magazine in the new world – everyone at a distance, yet nobody alone”, Farneti explains.

There are also contributions by a number of fashion designers.

Meanwhile, other designers were invited to write about Italy under the lockdown: Alessandro Michele and Pierpaolo Piccioli describe how they’re working on their new collections from home; Rimini-born Massimo Giorgetti reminisces about the season of the great discos, which now seem unlikely to reopen; southern Italian Fausto Puglisi reflects on why the balcony is so important in our collective consciousness; Gherardo Felloni from Isola del Giglio tells us about quarantine in a remote and isolated part of the country.

Thanks to the “digital solidarity” initiative implemented by Condé Nast, the digital version of the April issue of Vogue Italia is available to download free of charge.