In testing circumstances, designers often go back to the idea of creativity with very little means, a cross between the leaders of Arte Povera and the no future provocateurs of punk rock. Valentim Quaresma presented a collection in Lisbon that focused on upcycling, but done in his own way and true to its aesthetics. Dark romance and primitive arts are often on the designer’s mind and he tends to approach fashion in a genderless and limitless way. Hints of Blade Runner seemed to define his show, which seemed to celebrate retrofuturism. Quaresma recycled old film and various home equipment to striking effect, showing that craft has, in fact, no boundaries. Telephone cables were used to make an impressive medusa-like collar that took us back to Greek mythology, and cassette film became disco decadent fringing embellishment for a dark, sleeveless top. Quaresma also tapped into the fetish vibe of the season by featuring PVC trench coats and jumpsuits. His rebellious voice and high-energy shows are welcome additions to the Lisbon calendar. 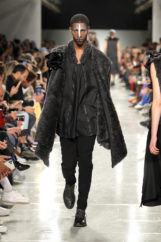 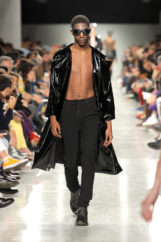 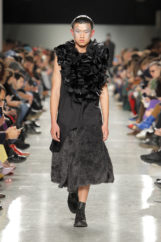