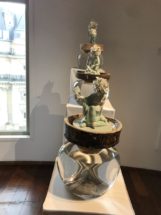 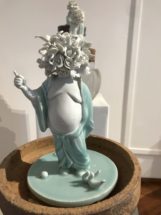 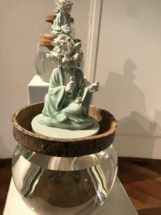 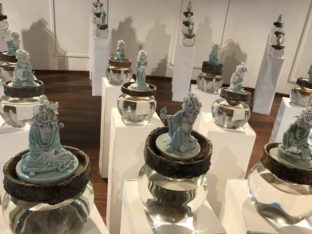 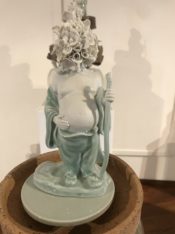 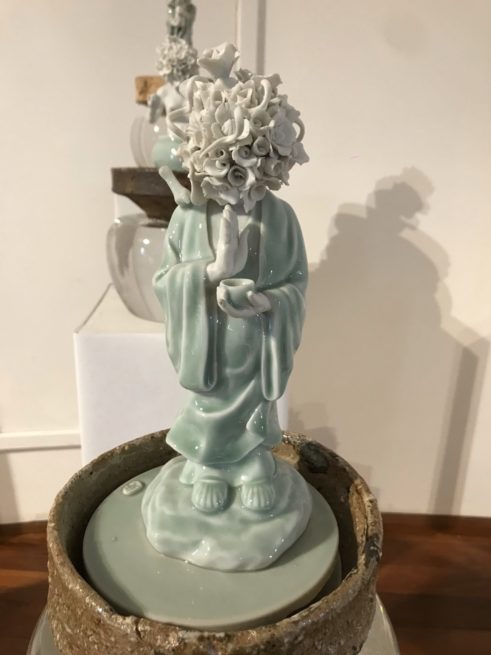 On the occasion of this 9th edition of Carte blanche, the National Museum of Asian Arts – Guimet has chosen the contemporary Chinese artist Ru Xiao Fan. Painter, sculptor, storyteller, lover of life, poet of humour, he has imagined for the MNAAG a pantheon of delicate and facetious divinities. 72 sculpted works in porcelain, arranged in a fan like a mandala, specially assembled in the rotunda on the 4th floor. This installation  echos the collections of Chinese porcelain in the museum on the 2nd floor, whether from Jingdezhen or Dehua. Between permanence and difference, tradition and contemporaneity, East and West, the dualities between the East and the West, are also found in Ru Xiao Fan’s double artistic education.

In resonance with the sacral space of the rotunda, these meditative figures exalt the age-old gesture of porcelain artists, mixing unglazed biscuit and celadon or bluish white glaze. The base of these sculptures is composed of the firing bowls from the Song kilns that the artist discovered by chance ten years ago in a market in the town of Jingdezhen.

The flower-headed figures are characteristic of the artist’s production. They evoke both the Buddhist mandala and the ceramic tradition of the Jingdezhen site. It was while visiting the museum that the artist remembered that he had depicted a Buddha sitting on a large dish with a bouquet of flowers in place of his head. He decided to take up this idea in part and to fix a ceramic monk (called luohan or arhat – a disciple of the Buddha) on the plates set in their base and to arrange the pieces in a fan shape, a form perfectly adapted to the circular space. Like an ode to the path, each of the figures installed on a crystal ball, as if weightless, seems to fly over the sea or the sky.

Ru Xiao Fan is an artist who could be described as Proustian. In fact À la recherche du temps perdu in Chinese version is his bedside book. In the development of his work, painting often prefigures sculpture whose series are so many spatial experiments questioning the relationship between their different components: sculpture, base and glass bell. A cocktail of forms, colours, textures and hybridization, his works evoke a popular art where fantasy and aesthetics dominate but also humour and cheerfulness. A perfect synthesis between the human and the vegetable, which are fundamentally united in Chinese thought, without losing an aesthetic sense full of poetry.

Ru Xiao Fan was born in 1954 in Nanjing (China). He graduated from the Fine Arts of the Ecole Normale Supérieure in Nanjing in 1982 and from the Ecole Nationale des Beaux-Arts in Paris in 1986. He was a scholarship holder of the Casa Velasquez in Madrid in 1988 and 1990. He lives and works in Paris. Due to his double artistic education, Ru Xiao Fan moves in turn from a Western pictorial language reminiscent of Pop Art to sculptures made in traditional Chinese techniques such as lacquer and porcelain. If modern consumerism and still life are recurrent subjects in his work, flowers have been a major theme since his series of paintings entitled 100 flowers (2003), referring to the Maoist slogan “Let a hundred flowers bloom”.