NINAMOUNAH’s love letter to dear old Amsterdam’s wintery darkness took place at Het Hem, a former bullet factory that has been transformed into a cultural center and art space. It started with a song– the third model transforming into the singer of the band– and not even her own drummer and guitarist could restrain Meis Vranken’s bursts of “I AM CUTE!” It was like a hail of gunfire right up to the finale.

It was circa 1970 that the first Motor Sport Club Amsterdam was created with its focus on tension around the body and leather became a symbol of the revolution. But the city’s sexiest sport was destined to move beyond spark plugs and tight tires and soon after development the oiled biker jackets had no choice but to mingle with the society of the arts. The butch mix of these two scenes is also traceable in NINAMOUNAH’s Fall/Winter 2020 deconstructed tailoring, proving that the brand can really extract Amsterdam’s core as no one has before. 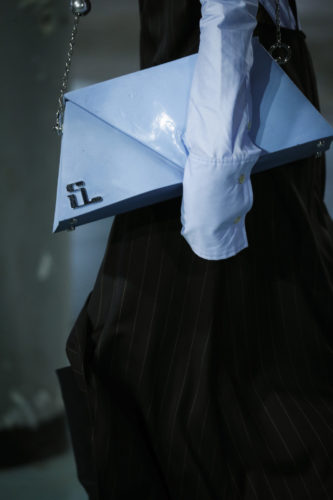 With five collectable collections behind, creative director Ninamounah Langestraat and brand director Robin Burggraaf have now been able to find the identifying point in their Amsterdam based brand NINAMOUNAH. Every possible reincarnation of diversity, manifested previously in banners, was now delicately tailored into each individual piece, rendered almost invisible as to avoid an overdose in cliché. Moving away from their signature body tops, a pinstripe double-breasted coat in grey herringbone filled with matelassé stole my attention. As the long coat in black left its impact upon us, finally highlighting the merino wool caramel jacquard vest, it was as though traditional fetishism had been blended with technical sophistication. And, of course, those pelvic handbags with embossed genitals and signed by Stefan Looveren was a balancing art. 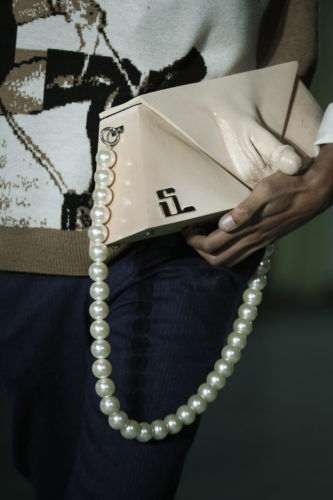 While NINAMOUNAH’s clever editing has become Amsterdam Fashion Week’s bullet on the cake for the third time, it is also a brand that could be compared to the early days of Ann Demeulemeester or A. F. Vandevorst. This begs the question: will indexless black also tint Amsterdam fashion? Shouldn’t we all focus on this and forget couture following in the footsteps of Antwerp and Tokyo and their excellent criteria for wearability and distribution of black ready to wear?