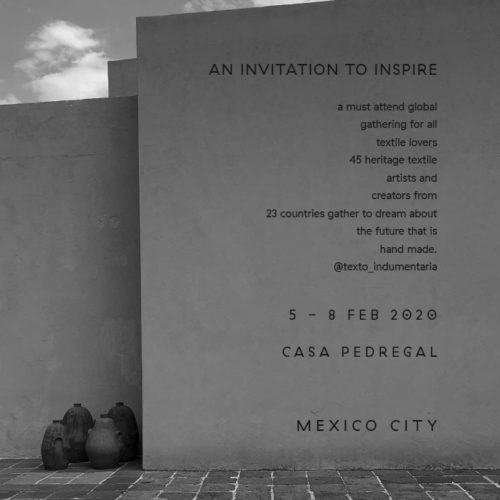 Dear Shaded Viewers,
TEXTO 2020 champions textiles and sustainable living by inviting master artisans, activists and thinkers to gather together and dream about a future that is handmade taking place at Casa Pderegal in Mexico City, 5-8 February. The aim is to inspire new generations to value sustainability, personal identity, tradition and responsible consumption over commercial tendencies based on unbridled consumption. The platform will offer a moment of reflection and will promote individuality, the unique, the beautiful and the long-lasting.
The event is held at Casa Pedregal, designed by the Mexican architect Luis Barragán (1902-1988) whose spaces look as if they could have been designed to appear on Instagram. The venue’s owner—art collector and hospitality entrepreneur Cesar Cervantes—has served on many museum boards, including Tate London, MoMA New York and Museo de Arte Moderno Mexico City. He is one of TEXTO’s four organisers. Another, Johann Mergenthaler, is also behind several events on the city’s cultural calendar as director of the fashion platform Diseñando México 32 and curator of ZonaMaco, one of Latin America’s most important art fairs. The remaining two are heavily involved in heritage textiles: COVER contributing editor Marcella Echavarria runs a branding consultancy firm focused on sustainable luxury and the global handmade and has advised UNESCO and the United Nations (among others); Kavita Parmar is a fashion industry activist , founder of the IOU Project and consultant for companies such as Nike, Levis and Ikea, as well as the Indian government. She says of TEXTO: ‘We, the dreamers, gather to honour the maestros, the storytellers of our past, our craftspeople from around the globe who have, in spite of it all, continued to practise the ancient traditions like a ritual to make sure we did not lose that knowledge.’
Artisans include indigo master Aboubakar Fofana, Sanjay Garg from Raw Mango, Kashmir Loom from India, Somporn Intaraprayong from Thailand, and Remigio Mestas from Mexico among many others.

The diverse line-up of top international speakers is sure to deliver a broad philosophical perspective. Among them are best-selling authors, including social activist Dr, Vandana Shiva.  There will be workshops and round tables led by curators Kavita Parmar and Marcella Echavarria on subjects such as real indigo and its impact on the future of fashion; traceability as an answer to cultural appropriation and many others.

Tickets can be purchased here: https://texto.one/tickets