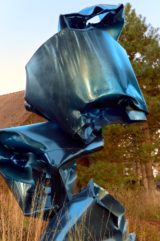 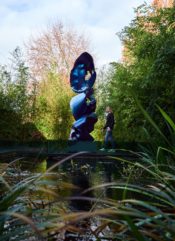 Arne Quinze is welcoming four new residents to the garden. The Lupine sculptures came into being thanks to Arne Quinze’s daily encounters with the unbridled beauty of nature. They symbolise his reflection on todays growing differences between the diversity of nature and the ongoing expansion of monotone cities.

Chroma Lupines, a new series of sculptures, have a monochromatic appearance but assimilate with their environment. Hues tend to vary when the spectator changes perspective or light sources change position. The array of soft reds enlightening the surface during sunset give a totally different glow than hard light around noon. This quality is widely spread in nature – the Chameleon as the best example of course – but the lupine flowers have magical attributes too: the upper petal of the ‘Lupinus Sparsiflorus’, commonly known as the Mojave or Coulter’s Lupine has a yellow spot which changes to reddish after pollination.