Nothing beats the excitement of discovering a gifted young designer, especially if it happens by chance. I was recently invited to Moldova by Carolina Tulgara, who works as ZIPhouse’s Executive Director, to attend their annual Moldova in Fashion Conference, which was focused on sustainability and how to move fashion forward. Not many people know that Moldova has been producing clothes for some of the most famous brands in the world and there is great craftsmanship to be found within the country, especially when it comes to high-end design and manufacturing. Local designers either sell in small, confidential boutiques or have their own space where they can accommodate custom-made orders, allowing them to grow their clientele. ZIPhouse has a large office and workshop space in Chișinău – Moldova’s capital city – which designers can use to make their samples or simply work on their collection plan. I met Constanzia Yurashko during my visit of her space there and was instantly struck by her exquisite tailoring and use of materials, such as silk chiffon, wool flannel, textured tweed and felt. Entitled “The Abyss”, her collection played with historical references and gender divides, fusing the sharpness of military styles with the restraint of Victorian shapes. The result was dramatic, yet wearable, with carefully placed ruffles and strong shoulder lines. Showing too much skin feels vulgar right now, and there was something seductive about the designer’s long skirts, chic blouses and structured silhouette. Her coats and jackets were also standouts, looking great on both men and women. The Moldovan designer presented her collection in London last September and received great feedback from press and buyers. Completely self-taught, she never attended any fashion school, but was always passionate about clothes and their construction. The more I looked at her pieces, the more I realized they had an aura and sense of mystery, something quite rare within today’s fashion landscape. 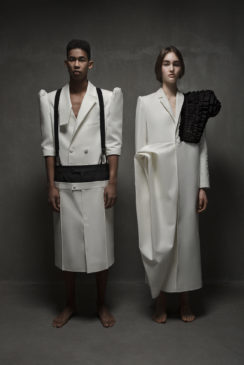 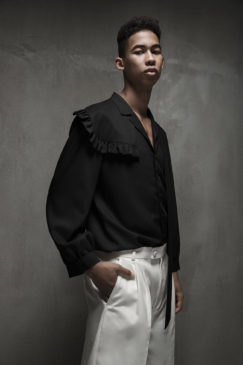