It only took Constança Entrudo a few seasons to become one of Lisbon’s most relevant voices in fashion, and her last collection was one of the best presented during the MODALISBOA schedule. This time, Entrudo mixed influences from two decades that emancipated fashion and the women who wore it: the 20s and the 70s. Reinterpreting the flapper dress, but using slashes instead of fringing, the Portuguese designer pursued her search for innovative textiles, finding new and contemporary ways to do embellishment. Crop tops and low-waist flares had a youthful energy, while tailoring was long and lean. Graphic cut-outs, psychedelic prints and ombré effects were some of the collection’s key motifs, as well as asymmetrical styles and transparency – a big trend on Lisbon runways. The overall effect was raw and sophisticated at once, ultimately defining the designer’s singular voice and her gender-fluid take on clothing. Entrudo doesn’t go for easy garments or traditional effects, but her sense of styling and proportions distinguish her from her peers. It’ll be exciting to see where she goes next. 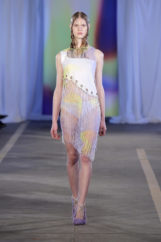 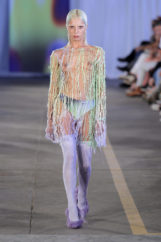 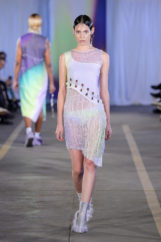