One of the master technicians of Lisbon Fashion Week, Aleksandar Protic explored sartorial paradox and contradictions this season, reconciling opposite genres to come up with hybrid garments, which were still alluring and wearable. The designer had futurism, utility and romanticism in mind, which he fused with his signature draping and striking bias cuts. Protic can take white faux leather and give it fluidity and ease, or elevate basic checks to create chic asymmetrical dresses trimmed with ruffles. However complex his construction gets, there’s always an attitude and confidence to his woman that makes her appear bold and in charge. The designer’s embrace of the future was clear in his choice of stark, pure white -which dominated the show- while he also picked bright color accents to add dynamism to the silhouette, such as orange, yellow and blue. It didn’t matter how much skin his models revealed, they remained in control, which is what the designer wanted. 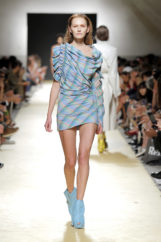 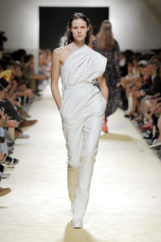 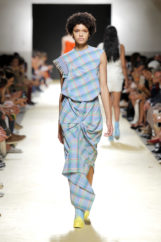