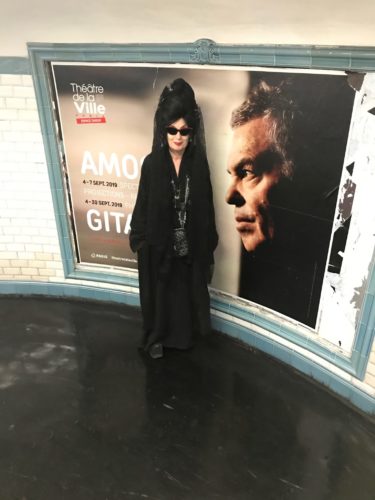 When I moved to Paris in the end of 1990 I thought that I already had a job as the costume designer on Golem l’Esprit d’Exile by Amos Gitae. However when I arrived to his production office I saw that he had already hired another costume designer however he did not tell me. He just gave me the script in french to read on the spot and said the brief was anytime from 300 years before Christ to today. He gave me the weekend to come back with my ideas. I worked over the weekend in Normandie going through a friends fabrics and working out a structure. It was to say the least a very unpleasant experience and after 5 other costume designers, Amos called and asked me to recreate the beginning and end of the film on the two principle actors. I was enchanted to dress Hannah Schuyulla who was the fetish actress of my favourite director at that time, Rainer Fassbinder and to work with the lighting director Henri Alekan who worked with Jean Cocteau in the films La Belle et La Bete and Orpheus and with Wim Wenders on Wings of Desire. The man was genius and very human and beyond a pleasure to work with. At any rate you can listen to my short story on the youtube above recorded by Marco de Rivera.