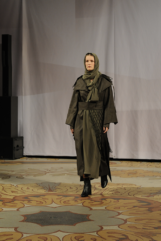 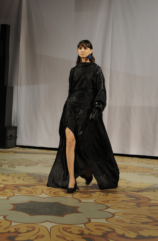 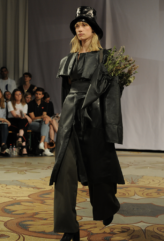 For this collection, Katarzyna Cichy was inspired by the adventures and the life of Jeanne Baret, the first woman who sailed around the globe from 1766 to 1769, along with Louis-Antoine de Bougainville.
Jeanne Baret was a botanist and in order to take part in this expedition, to keep her freedom and to pursue her work, she disguised herself as a man for the journey. In large oversized jackets and men’s trousers, tied tightly around her waist, she sailed the seas and explored the lands, collecting thousands of specimens along the way. Her clothing allowed her freedom, power and served as an essential tool. The young designer imagined clothing which Jeanne could have worn, a jacket with large shoulders and deep pockets in which to store specimens, small pockets to conceal her most intimate objects from others. High gloves to protect her hands, large hats to keep her out of the sun rays, boots to protect her from the high tides.
The pieces in the collection can be worn in varying ways, with buttons and folds that conceals the most delicate parts of the body. They are carefully tailored pieces that can adapt, be layered and be transformed.
Large masculine cuts wrap and drape around the woman’s body. All the materials are natural, in deep blues, earthy greens and botanical yellows. The garments are accentuated with hand knit textiles and ceramic details.
“The first elements which I think of when imagining clothing are aspects of our notions of home“, explains Katarzyna Cichy. “I intend to make clothing which serves as a tool for the body, within our forever changing surroundings. Clothing to accompany us along our adventures and excursions, serving as a  material artefact, as a capsule for the immaterial thoughts and emotions which we hold dear. These articles, be it a piece of clothing of jewelry, a scarf wrapped tight around the neck or an over-sized jacket that protects us from the harshness of the exterior world, transcend their materials properties.“
Defending the subtle idea of “de-facto feminism” in the very heart of a French science museum, the collection is a powerful ode to women who take power with elegance and relevance.