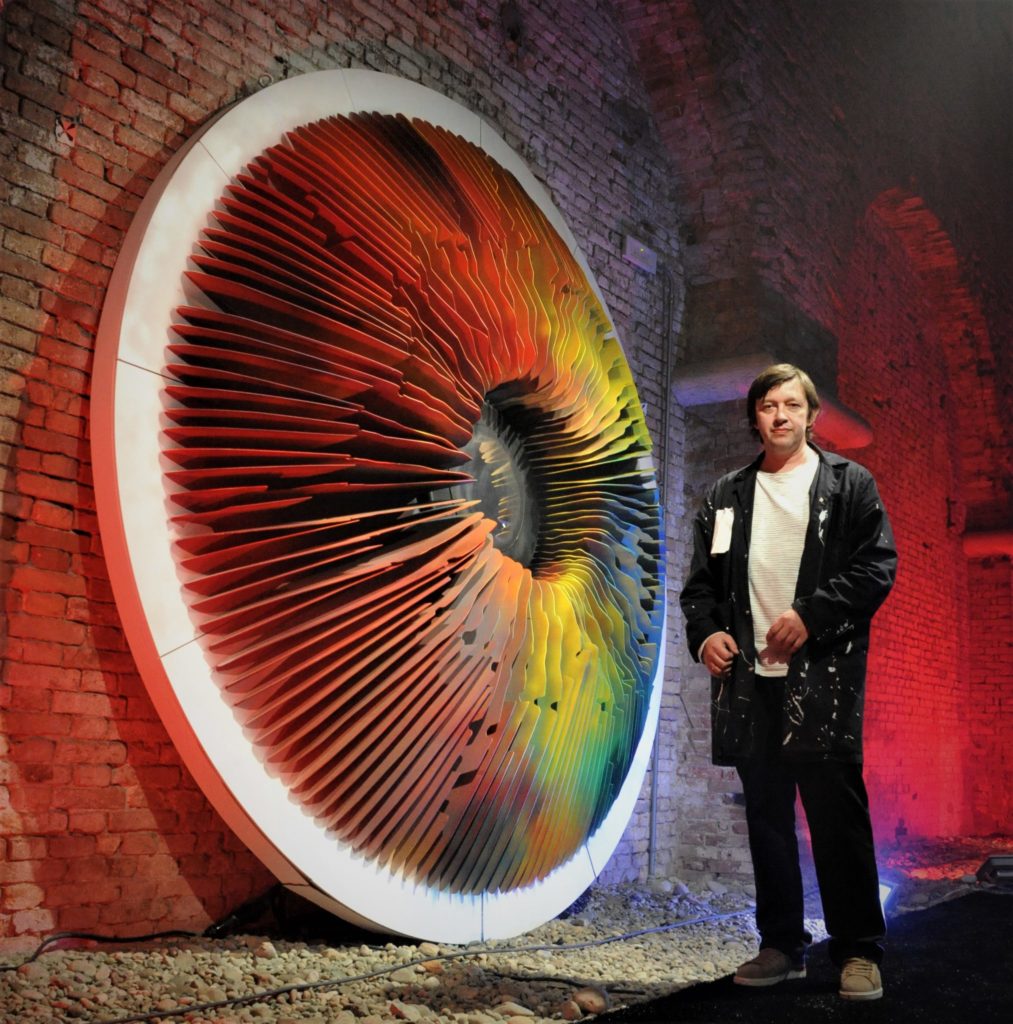 Russian artist Vasily Klyukin is going places where we’re all afraid to go—the dark side. Our seven sins are nothing in comparison to the 22 vices, which the artist has laid out in his latest exhibition, In Dante Veritas, which is on view during the 58th Venice Biennale, until November 26. The artist’s work, on view in a shipyard warehouse on Arnsenale Nord (Tesa 94), shows ties into Dante’s 100 vices—but has chosen 22 that we suffer from the most today. Our vices include flattery, gloom and anger, as well as being hypocritical and betraying others. Over 30 sculptures are on view, including a sculpture devoted to overpopulation, which the artist calls “the true plague of our times.” He also says that pollution “will kill humanity.”

The last room of the exhibit is devoted entirely to betrayal, where people can share their own stories by writing names of things—or people—on the walls. “The mirrors that reflect sins can show us who we are and help s understand what we do,” said the artist. “Or they can help us see others. If you look vice in the face, its easier to fight it.” Walking through the exhibition (which has a poetic audio guide) helps us see our own faults and perhaps, better ourselves. Klyukin spoke to us about darkness, light and why here, why now. 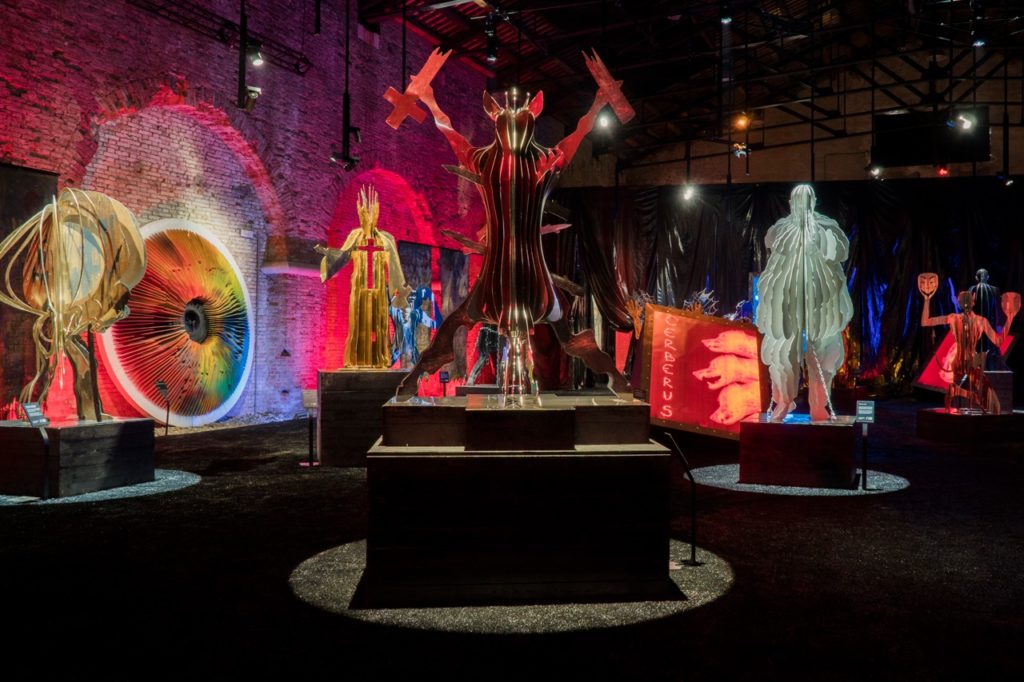 Why did you use Dante as a starting point for this exhibition?
Vasily Klyukin: I didn’t want to take religious scenes. Its not about sins, its about vices. There’s a big difference. If you accept vices daily, it could become a sin. When I smoke, I accept the vice of suicide. If I eat more than I should, I accept gluttony. It’s a visitor that comes into my soul, it makes me temporarily in between darkness and light. Its like a scale. The more vices you accept, the darker you are. But everyone can be strong inside.

What’s the story behind some of these pieces?
Dante created 100 vices, I chose the ones I thought were the most important for today. The “Hypocrite” sculpture, for example, wears two masks, but in this sculpture, he has to show his true face, he can’t hide it anymore. In the “Deception” sculpture, he’s saying “I have nothing, I don’t even have a head,” but if you look behind him, he’s hiding his head. “Simonac” sold his cross and is transparent but has now gold. “Flagator” is a double sin of anger and sin; if you feel sorry for yourself but are also mad. But it’s the same sin. I show how sins look along with their punishment. “Fornication” is a vice where he is chained like a dog to his desire. I hope that this exhibition can change people’s minds.

What was the reception of this exhibition like in Russia, when the discussion is about religion?
It was in a theatre and on the first day, a lawyer came and gave me his business card and said “I think you’re going to have a problem, here’s my business card, call me.” This is an exhibition about evil and good. It’s a way to explain what’s good and bad. Dante is maybe heretic, its been over 600 years.

What sculpture started the whole series?
It was betrayal, I trust people. I’ve got a problem. Even with a Rabbi, giving advice, I’m half-Russian, half-Jewish. I took advice from advisors, religious figures. I asked a Rabbi through a friend, who said you have to forgive people who betrayed you, otherwise you keep the evil going inside of you. Now, I don’t feel any more pain or anger. 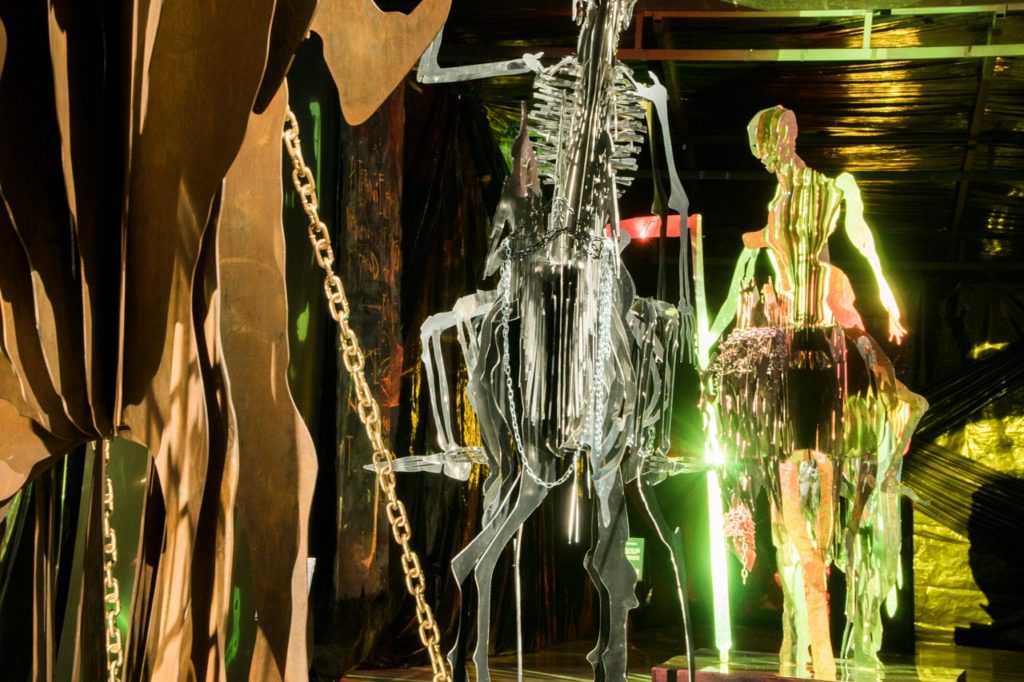 Why is the betrayal sculpture in its own room?
There’s a pen where people can write on the walls who betrayed them as a way to let it go. Some people come and write names, others write countries, others write “I want to forgive you” but others write “please forgive me.” It’s personal.

Why in Venice?
This exhibition is close to the theme of the exhibition “May you live in interesting times.” Now it’s a time of changes, a time when we need to make a serious decision about pollution. We can’t wait any more. We are responsible. In the past few years, we’ve seen a lot of changes, it’s become a bigger problem. Most people don’t know about the huge garbage patch in the ocean. Animals are becoming extinct, like this tiger piece, for example.

What links most to social media? People are addicted to the internet.
A lot. The Instigator, it sucks you in and you check it all the time. Another is the Provocateur, even Limbo, the easiest vice, when people don’t decide. They’re all angles of evil. This exhibition is to help people dive into their own soul. I don’t want them to be scared here, there’s much light here. It shouldn’t disturb you. None of us want to be bad, good people can be bad people. That’s why the Avengers film is such a box office hit, people want good to win over evil. This is a good way to find your faults and correct them. Soul reflection. 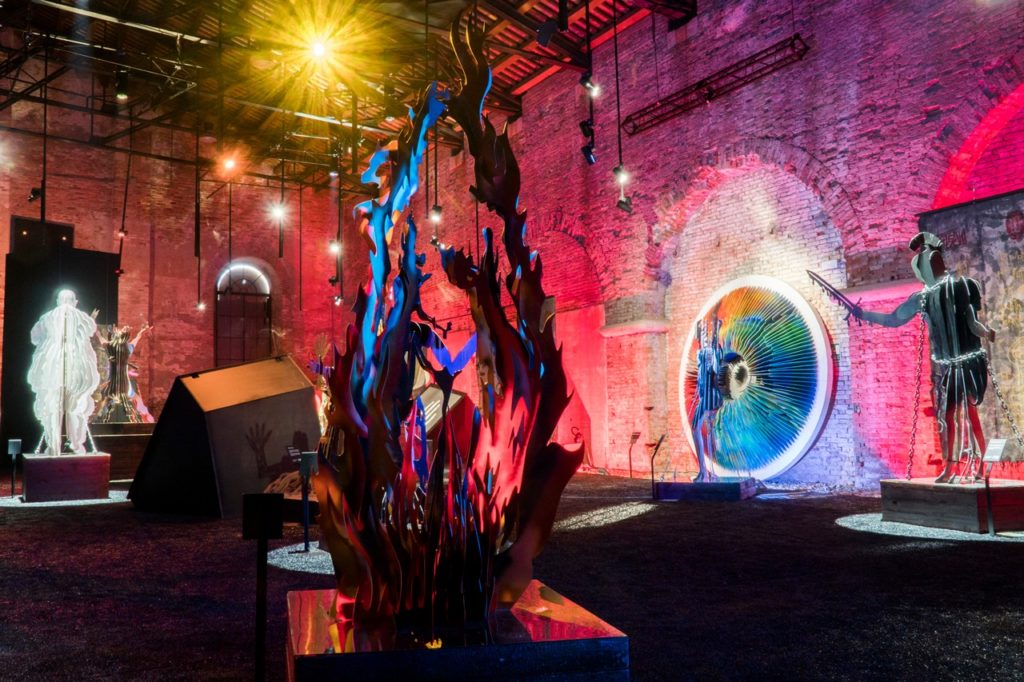