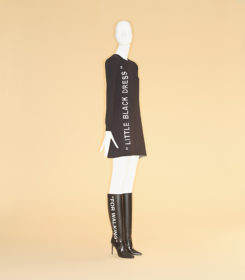 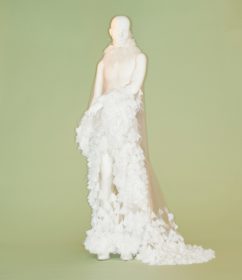 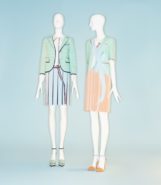 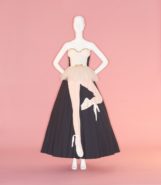 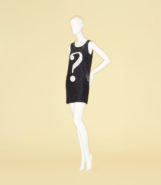 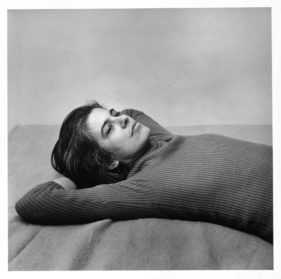 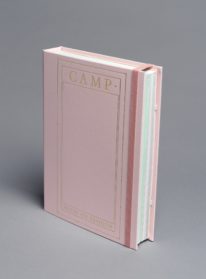 Camp: Notes on Fashion opens to the public at The Met May 9 – September 8th and explores the origins of camp’s exuberant aesthetic and how the sensibility evolved from the margins to be an important influence to the mainstream.

Susan Sontag’s 1964 essay “Notes on ‘Camp’” provides the framework for the exhibition, which examines how fashion designers have used their métier as a vehicle to engage with camp in a myriad of compelling, humorous, and sometimes incongruous ways.

The exhibition is made possible by Gucci. Additional support is provided by Condé Nast.

“Camp’s disruptive nature and subversion of modern aesthetic values has often been trivialized, but this exhibition reveals that it has had a profound influence on both high art and popular culture,” said Max Hollein, Director of The Met. “By tracing its evolution and highlighting its defining elements, the show embodies the ironic sensibilities of this audacious style, challenges conventional understandings of beauty and taste, and establishes the critical role that this important genre has played in the history of art and fashion.”

The Met Gala is The Costume Institute’s main source of annual funding for exhibitions, publications, acquisitions, and capital improvements.

“Fashion is the most overt and enduring conduit of the camp aesthetic,” said Andrew Bolton, Wendy Yu Curator in Charge of The Costume Institute. “Effectively illustrating Sontag’s ‘Notes on “Camp,”’ the exhibition advances creative and critical dialogue about the ongoing and ever-evolving impact of camp on fashion.”

The exhibition features approximately 250 objects including drawings dating from the 17th century to present. The show’s opening positions Versailles as a “camp Eden” and address the concept of se camper—“to posture boldly”—in the royal courts of Louis XIV and Louis XV. It then focuses on the figure of the dandy as a “camp ideal” and traces camp’s origins to the queer subcultures of Europe and America in the late 19th and early 20th centuries. In her essay, Sontag defined camp as an aesthetic and outlined its primary characteristics. The second section of the exhibition is devoted to how these elements—which include irony, humor, parody, pastiche, artifice, theatricality, and exaggeration—are expressed in fashion.

The exhibition is organized by Andrew Bolton, Wendy Yu Curator in Charge of The Costume Institute; with Karen Van Godtsenhoven, Associate Curator; and Amanda Garfinkel, Assistant Curator. Theater scenographer Jan Versweyveld, whose work includes Lazarus with David Bowie as well as Broadway productions of A View from the Bridge and Network, created the exhibition design with The Met’s Design Department, and consulted on the gala décor with Raul Avila, who has produced the décor since 2007. All headdresses are specially created for the exhibition by Stephen Jones.

Since you are not there for the audio scape, here is a sampling of texts and a note who did the audio recordings:

Camp: Notes on Fashion  – Gallery Wall texts and labels Spoken Statements in Part 2 of the Exhibition

“Camp is the psychopathology of affluence.” – Susan Sontag, 1964 Spoken by Mary Katrantzou

“Camp taste is by its nature possible only in affluent societies, in societies or circles capable of experiencing the psychopathology of affluence.” – Susan Sontag, 1964 Spoken by Gareth Pugh

“Camp is dandyism in the age of mass culture.” – Susan Sontag, 1964 Spoken by Dapper Dan for Gucci

“Camp is the answer to the problem: how to be a dandy in the age of mass culture.” – Susan Sontag, 1964
Spoken by Alessandro Michele for Gucci

“Camp is “the apolitical badge of the consumer.” – Moe Meyer, 1994 Spoken by Dapper Dan for Gucci

“Camp taste turns its back on the good-bad axis of ordinary aesthetic judgement. Camp doesn’t reverse things. It doesn’t argue that the good is bad, or the bad is good. What it does is to offer for art and for life a different – or supplementary – set of standards.” – Susan Sontag, 1964

Spoken by Donatella Versace for Versace

“Camp is a means by which cultivated taste is deliberately thrown into reverse so that aesthetic absurdities become desirable.” – Scott Byrd quoting John Canaday, 1968 Spoken by Alessandro Michele for Gucci

“In the cultural sphere, to be camp is to be perversely committed to the trash aesthetic or to a sort of ‘cultural slumming,’ . . .which, being in theory incomprehensible to non-camp people, becomes fashionably exclusive.” – Mark Booth, 1983
Spoken by Christopher Bailey for Burberry

“Camp demonstrates an exhilaration in identifying with the lowest of the low.” – David M. Halperin, 2012
Spoken by Jeremy Scott for House of Moschino

Camp “makes no distinction between the unique object and the mass-produced object. Camp taste transcends the nausea of the replica.” – Susan Sontag, 1964
Spoken by Nicolas Ghesquière for Louis Vuitton

“Camp is the artifact past its prime.” – Caryl Flinn, 1995 Spoken by Alessandro Michele for Gucci

“Camp has always been fascinated with, and has fashioned itself on, the outmoded, the out of date, the artifact passed its prime.” – Caryl Flinn, 1995
Spoken by Alessandro Michele for Gucci

“Things are campy, not when they become old––but when we become less involved in them, and can enjoy, instead of be frustrated by, the failure of the attempt.” – Susan Sontag, 1964
Spoken by Richard Quinn

“Camp sorts through the cultural junkyard with an abjection magnet, seizing upon discarded-but-still-glittering bits of debris.” – J. Bryan Lowder, 2013
Spoken by John Galliano for Maison Margiela

“Camp takes styles from the past and uses them to sidestep the onward march of history. The historical process is reduced to the ephemeral.” – Mark Booth, 1983
Spoken by John Galliano for House of Dior

“Camp people look back on Versailles as a sort of camp Eden, a self-enclosed world devoted to divertissements, to dressing-up, showing off, and scandal.” – Mark Booth, 1983 Spoken by Jeremy Scott for House of Moschino

“Camp people are born in a Hall of Mirrors and never find their way out of it.” – Mark Booth, 1983
Spoken by Andreas Kronthaler for Vivienne Westwood

“Camp is by its very nature, political, subversive and even revolutionary.” – Bruce LaBruce, 2012
Spoken by John Galliano

“Versailles stands in camp memory, not, as it was intended, as a symbol of decorative absolutism, but as a symbol of absolute decorativism.” – Mark Booth, 1983
Spoken by Ada Kokosar

“Hollywood was a great haven for camp because it needed to compensate for bad acting, because it was a theatrical community protecting the eccentric, and because it offered the one power the camp personality cannot do without – money.” – Philip Core, 1984
Spoken by Alessandro Michele for Gucci

“Camp is Marilyn Monroe type-cast as a tartelette extraordinaire . . . unable to break the straitjacket of her own sexuality.” – Philip Core, 1984
Spoken by Jeremy Scott for House of Moschino

“The horror genre, in particular, is susceptible to a camp interpretation. Not all horror films are camp, of course; only those which make the most stylish conventions for expressing instant feeling, thrills, sharply defined personality, outrageous and ‘unacceptable’ sentiments, and so on.” – Jack Babuscio, 1977

Spoken by Jun Takahashi for Undercover

“Camp is girls who wear starched maternity dresses without being pregnant.” – The Realist, 1962
Spoken by John Galliano for House of Dior

“Since camp involves the refusal to grow up, it sees ageing as a particularly unattractive process which it is important to carry out with good humor.” – Mark Booth, 1983

“All her life, the camp person remains a naughty child cheeking her elders.” – Mark Booth, 1983
Spoken by Anna Sui

“Camp is démesuré in the quality of the ambition.” – Susan Sontag, 1964 Spoken by Pam Hogg

“Camp confers legitimacy on what it pretends to ridicule.” – Hilton Kramer, 1982 Spoken by Jeremy Scott for House of Moschino

“Camp is a lie that tells the truth.” – Philip Core, 1984 Spoken by Alessandro Michele for Gucci