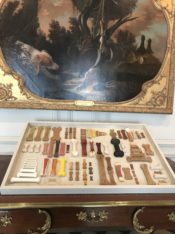 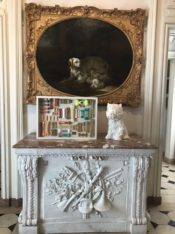 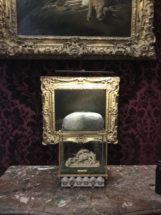 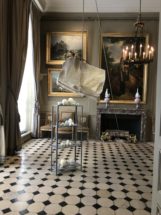 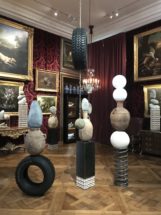 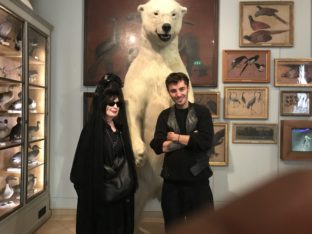 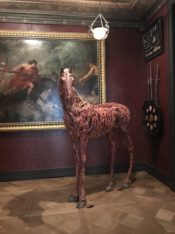 I missed the opening earlier in the week but I was honoured to have a private tour of Every Stone Should Cry by the artist/sculptor/director, theO merCIER. It’s hard to believe that it has been 10 years since his first solo show at Musee de la Chasse et de la Nature. I cannot even remember when I met theO merCIER, I know it was years before the first solo show and also that it was  through my friend Miguel Villalobos and in Paris, so it was somewhere between 10-15 years ago.  I  admit I fell in love with him and his art immediately. There is something sexual, tender, poetic and humorous about him and his work. I’ll never forget the first time I saw the Spaghetti Monster, it was love at first sight. He’s currently in a box at the Maison Rouge. Not only is theO merCIER an artist and a sculptor but he is also a Director and he and Steven Michel will be honoured with the Silver Lion at the  this editions Venice Biennale with the 2019 Lion Awards for Dance on June 21st. Steven Michel studied mime, dance, percussions and theO merCIER visual arts and theatre direction. Together their work is an intersection between art and choreography and like Every Stone Should Cry, the work is the relationship between the objects and the body. theO merCIER finds his stage work influences his art in as much as how he chooses to organise space and the relationships between the objects and the audience as a choreography. He has directed 4 plays to date. 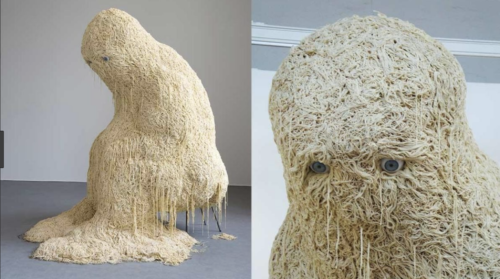 The Museum asked theO merCIER to make a monumental piece for the courtyard. He and his ex-assistant created a cat tree made out of bronze and called it “Modern Art for the Cat”. 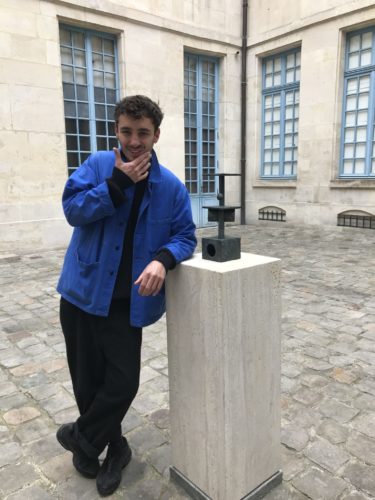 The title of the exhibition is from an imaginary song theO merCIER created about the artistic jest and the material. On the ground floor of the museum you will find yourself partially placed in an imaginary aquarium where fish tank stones and paraphernalia obtains exaggerated sizes. The viewer becomes the fish in the tank  as  if in a human zoo. theO merCIER’s  idea was to create an environment for the audience somewhere between a laboratory for human observation, a pet store or a supermarket, it also feels a bit like an old apothecary the setting exists somewhere in between. It is set up like a  commercial garden where you can touch everything, but don’t,  it is all meant to be appealing and at the same time really toxic. I was curious to know, since everything is so out in the open if anyone had stolen any of the art objects, so far…one egg.  Part of the fun of the exhibition is the domestic drama he likes to create and  which has always run through his work he enjoys taking  everyday items and making them into sexual objects of desire, allbeit playful ones, they could take the form of breasts or dicks.  merCIER is not a pet owner but he does like to make a commentary on the forced visibility of animals that have no choice but to be watched in a cage. As you walk through the rooms you will see  animals habitats or mini humanised world as an architectural promenade all enclosed in glass cabinets.

As you arrive on the first floor you are greeted by a horse who’s flesh left his bones a long time ago, even so in the hands of theO merCIER, the horse has a sweetness about his bloody carcass that only theO merCIER could imbue. In fact merCIER said he felt good being reunited with the horse after years of separation,  he created him in 2012. Also upstairs are ceramic pieces created in Mexico with inset coyote teeth. Something used in witchcraft in that part of the world. Walking by one of the rooms you see a group of bourgeois chairs and at first I did not notice that they were perched on fragile eggs. I do wonder how that is possible considering the weight of the chairs and the fragility of the eggs, not sure why I did not pose the question at the time. That same kind of tension of not knowing if the eggs will break and the chairs will crash to the floor is part of the whole construction of the exhibition not only don’t you know if things are going to collapse or topple over but you put in question if the things are real or fake if they belong to the present or to the past. Some pieces like the ‘time machine’ are oversized quartz fossils from thousands of years ago, the jars are from the 18th century and huge suspended rocks probably made yesterday…figuratively speaking.  A piece called God’s Anger is an oversized fake rock suspended from the ceiling above eggs. The entire installation of the exhibition is made with a kind of dramatic tension showing us how fragile we are in our cities, our jobs, our love stories, it is all there now but for the future? it’s in a state of non-stop on the edge.

And then, there are the eggs, everywhere you look there are the eggs. Sometimes they are in egg crates with name plates on them with the date of creation as if they will live eternally and we hope that they will.. When I asked theO merCIER about the eggs:  “Eggs are the daily sculptures that chickens are making.” They are universal, they give birth, they signal time, they are fragile, they are strong and everyone is eating them.

In the very last room there is a case of discarded African masks. They were collected over a five year period and merCIER asked the mask sellers to only sell him discarded masks that were broken or insect infested and unsalable. It started out with one family of sellers being in contact and before he knew it there were phone calls non-stop to come look at their broken masks. Probably by the end of it they were breaking the masks just to sell them to him. We’ll never know, probably not but it makes for a funny story. 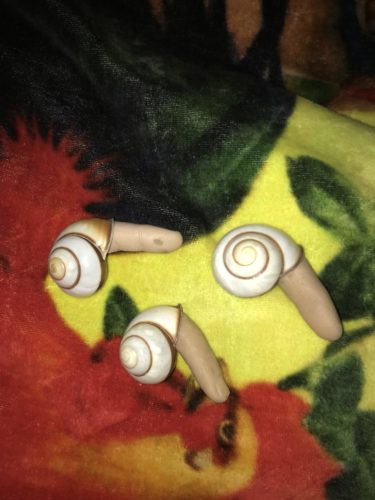 In closing a personal funny story. Years ago, maybe even 10, I remember I was at an event, perhaps  it was ASVOFF, and theO put something in my hand, it was a gift, 3 rubber fingers in their own shells. It felt very strange in my hand, I could not imagine what he was handing me… they are still with me living on my shelves kind of a conversation piece when anyone’s eyes happen to land on them.