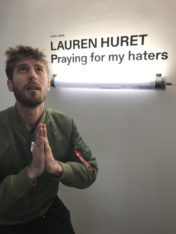 For her first solo show in France, Lauren Huret zooms in on an invisible aspect of the Internet: the deletion of images which, paradoxically, leave traces. To stem the flow of violent, offensive and traumatizing images constantly bombarding platforms like Facebook and Instagram, social networking services call on subcontractors who employ hundreds of thousands of behind-the-scenes “content moderators,” in many cases halfway round the world, to sift through and filter out this toxic content. Lauren Huret combines her research with in-the-field documentary practice, filming sweatshops in Manila where the daily task of viewing and filtering toxic videos and photographs is outsourced to an invisible workforce. In her new film and through a sculptural architectural model that reflects the labyrinthine system of these remote offices and networks, she fuses documentary with a haunting surreal phantasmagoria that evokes the murky world of these invisible net scrubbers, whose harrowing work is shrouded in secrecy.