A member of the Nouvelle Vague shaking Portuguese fashion, Gonçalo Peixoto presented a collection where a new conversation between formal and sportswear could take place, playing with sartorial genres to create a hybrid silhouette. Peixoto used sportswear staples, such as the hoodie, cycling top and puffer jacket, but he gave them a deluxe finish, using materials that were either experimental or sophisticated, such as devoré velvet, brocade or holographic nylon. Shine and reflection were key within the collection, adding visual interest to the simplest pieces. Underlining the dynamic edge of sportswear, the Portuguese designer crafted oversize pantsuits in bright check and rich purple, proving that tailoring doesn’t have to be plain or conservative. It will be interesting to see how Peixoto’s voice develops in the near future. 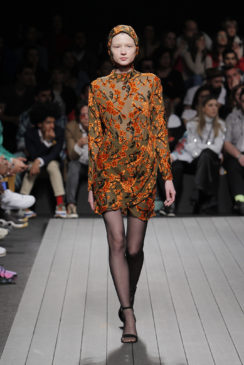 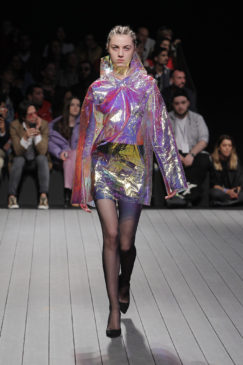