Born in Nampula, Mozambique, Carlos Gil is one of Portugal’s most prolific designers. He presented his debut show within ModaLisboa in 2014 and returned to the city’s calendar this season. Gil’s passion for color, sensuality and bohemian dressing was clearly evidenced within his last collection, defined by an artistic and sensitive approach to fashion. His prints referred to abstract painting and he used color-blocking to emphasize a carefree and eccentric attitude toward clothing. The silhouette was fluid and generous, from loosely fitted coats and t-shirts dresses to relaxed lurex separates and drawstring pants, giving rich textiles a nonchalant vibe. Gil played with texture throughout, from sensual velvet and airy chiffon to fluffy faux-fur, which he used on shoes and bags, as well as a shaggy mustard coat pinned with contrasting black brooches. His color palette was bold and vibrant, ranging from intense blues and fiery reds to deep green and luminous yellow. His more restrained side came across in his use of tailoring, from menswear-inspired pantsuits to a sequined jacket worn with a prim pussy bow blouse. If the overall styling sometimes felt a little chaotic, there was plenty to fall in love with in this collection, once you broke the silhouette down to reveal beautifully made, refined individual pieces. 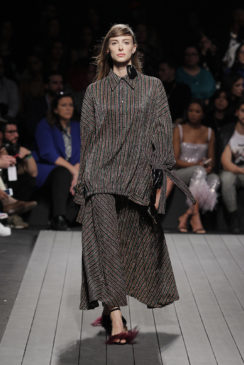 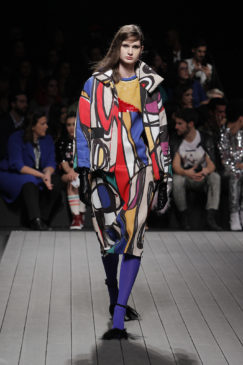