A designer of Irish and Portuguese descent, Andrew Coimbra delivered a strong and confident show focusing on sharp tailoring and sleek lines, as well as revamped proportions. The jacket is one of his favorite garments to interpret, and he offered forward-thinking versions for men this season: a slightly shrunken, double-breasted style with soft shoulders that had a Napoleonic feel, and a sportier, single-breasted one with a fitted drawstring waist and narrow lapels. Pants were either cropped or loose, and Coimbra’s reworking of outerwear classics was convincing, such as a roomy trench coat with contrasting fabric detail, worn over a crisp white shirt. He also showed streamlined looks on women, which were minimal and elegant. Embellishment overload, slogan t-shirts and “look at me” clothes have been part of our visual landscape for seasons now, but it seems that fashion is currently rediscovering the power of subtlety and more mature styles, moving away from gimmicky sportswear. Coimbra definitely belongs to those who believe in adult dressing, but his garments had interesting details and twists, preventing them from the mundane. 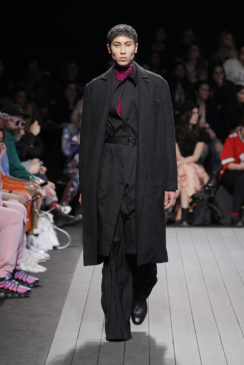 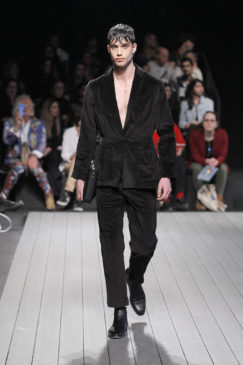