Portuguese designer Nuno Gama eschewed the traditional show format to present his new collection within the walls of Lisbon’s Ancient Art Museum. This year, the designer celebrated his first 25 years in the business and models merged with the artworks on display to present some of his signature styles. You could find Gama’s handwriting in every room: body-conscious tailoring and playful prints, as well as utility details and sheer effects on blazers or optical stripes for cropped fitted pants. Formal evening wear was a focus this time, with dapper tuxedo suits and sequin embellished pieces. If you want to wear Gama next season, be prepared to show some leg: his shorts verged on the side of micro and toned men showed off his new collection of underwear and swimwear. There is definitely a customer for this type of clothes and Nuno Gama has a loyal clientele in Portugal. Still, one missed the theatrics and over the top nature of his previous shows. It’d be lovely to see his menswear back on the runway next year. 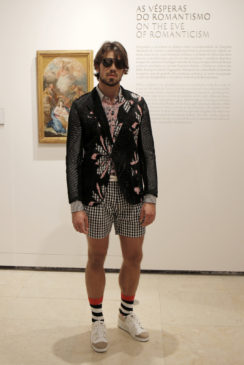 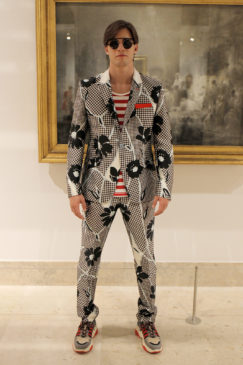