One of Ukraine’s most talented and innovative designers, Lilia Litkovskaya has been carving her own niche, catering for women who like intelligent and inspired clothes with a seductive flair. Her last collection -which was presented in a quiet courtyard inside Avenue Montaigne- felt timeless, refined and chic, with a softer hand than in her previous work. Pale pink dominated the palette, which gave fresh appeal to her sharply tailored pieces. Draping was also important, adding ease and drama to charming dresses, which would be ideal for garden parties. An oversize men’s shirt featured cute knots on the sleeves, casually paired with matching slim trousers. Litkovskaya’s ongoing play with gender binaries was apparent in her use of layering, too, covering a double-breasted jacket and roomy pants with an exquisitely embroidered sheer caftan, or combining a delicate ruffle top with a pair of boyish shorts. The pointy high heels worn by the models featured rope lacing, a wink to bondage that illustrated the designer’s love of contrast and opposition, fusing rough with gentle, soft and hard. 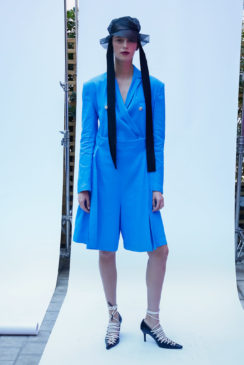 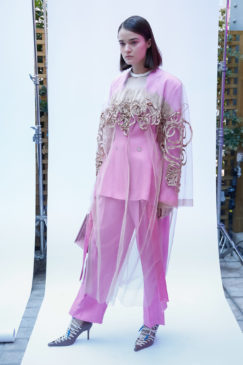