Dries Van Noten delivered a youthful and refreshing message with his show, focusing on sharper silhouettes and graphic effects, as well as unexpected textures. If this collection was not romantic and also devoid of nostalgia, it nevertheless evoked tradition in a fragmented way, referencing military styles and Couture volumes. Inspired by the clash between workwear and more ornamental clothes, Van Noten’s collection played with sartorial codes to achieve a kind of modern elegance that felt spontaneous and freeing. You could feel that energy in optically striped separates, which clashed with naive-looking florals and colored feathers. Lightweight outerwear – a key trend in Paris  – was prominent in the collection, from printed transparent trench coats to a glossy blue parka, which gave classic sportswear a Couture finish. Of course, you can still rely on the Belgian designer for an impeccably cut pantsuit or a utility-inspired cotton dress that will probably last forever. With their sporty sandals and strong eye-makeup, his women looked confident and sleek, ready to face all challenges coming their way. 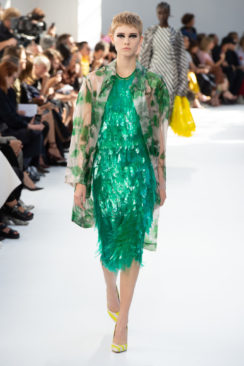 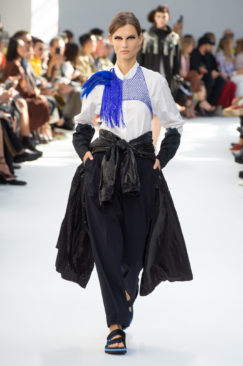