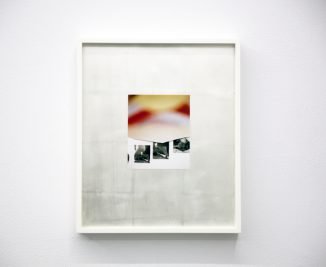 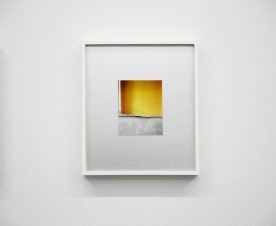 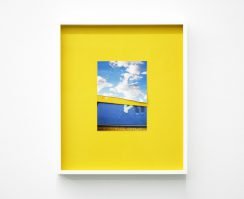 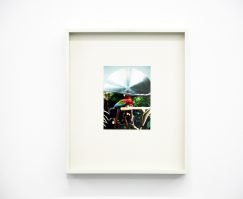 A conversation with Scott Treleaven is as casual as coffee break and reminiscent to an ethics course from college. The mix media artist casually speaks with an enthusiasm for life, a perspective that occupies his work. We talk about his perennial interest in Psychology and Buddhism, and his waning interest in cultism and magic, and as he has identified, “ideas that actively define life as it is experienced.”

These studies and beliefs captured Treleaven’s frame of mind and found an active response in his art – abandoning the culturally confrontational style and exploring the abstract — that creates a conscious understanding of the experience one has when gazing upon one of his paintings, or photographs.

Such was the intention behind his current exhibition on display at New York’s Invisible Exports and a smaller viewing at Toronto’s Cooper Cole Gallery. Treleaven’s frieze, a horizontal band of abstract circular shapes colored periwinkle and lime green float among shifting black panels resembling piano keys creates a melody over the space. As color beams through a black and white landscape, the continuance of the frieze emerges from the concept of film processing, an art form made from multitude of artistic expression.

Across the room his photography congregates. Similarly to the frieze paintings, this collection of untitled works presents a scene in development. A unfocused blur of colors – crimson, daffodil yellow and sapphire invade an escalating series of gray scale frames that — through repetitive images —expose physical acts of vulnerability and submission. A kneel to the ground, the stiff posture of a foot flexing and a head bowing to the ground, tousling the subject’s hair everywhere are all focused shoots the viewer must use to piece together photograph’s sum.

In another photograph an animated scene of two men stand side by side at the sight of their blue jeans, white slacks and oxfords, their upper bodies embodied by a separate image of clouds in the sky, a picture that was ripped as an intentional act of the artist to create wholeness within the image. In the case of the two conversational men, their heads were stuck up in the clouds.

Among this collection is an image of a silver disc cutting through a profile image of a scarlet macaw. Acting as a blade, the disc slices through an image of the bird in its natural environment of blissful paradise. Treleaven’s eye for juxtaposing two separate images curates a clean sight, leading the viewer’s mind’s to reach a deeper experience of identifying the meaning of the whole image. This photograph evokes the thought, perhaps a criticism directed to the world’s attitude towards our wildlife companions and their beautiful home.

Interested in art that guides a greater self-awareness within the human experience, themes of sexuality, nature, religion and fashion occupy his photography and create associations to which people create identity. This is where art holds its power. The difference between art and entertainment, Treleaven insights, “Art brings you closer to the process. Caught in the beauty, you’re aware that you’re having an experience.” His hope is that people will “generally take the time to look carefully, notice what is happening when you are looking at something.” You are the one, your eye that evaluates the work as one piece because it’s not. “The tear in the photo creates a horizon [just as the ] frieze creates a horizon and the shapes — celestial and interstellar “ establishing an experience that intangible, beyond this world.