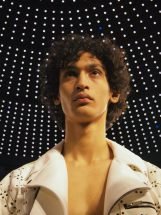 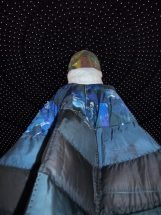 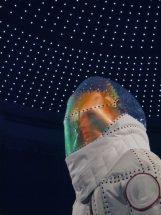 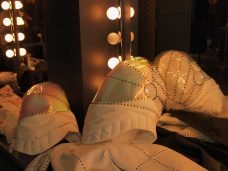 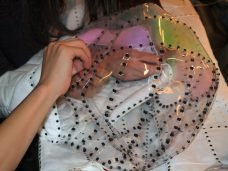 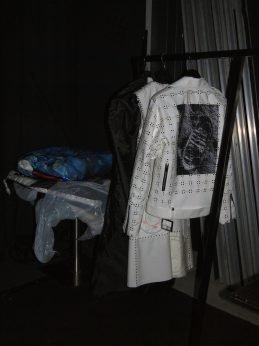 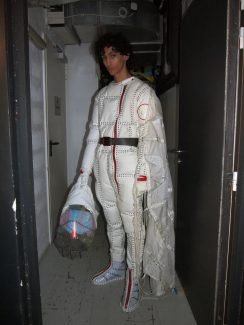 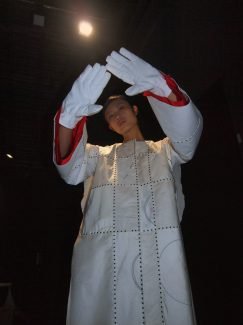 I’ve followed the work of Yuima Nakazato since he attended the Royal College of Antwerp and I found his show during Paris Couture one of the most stimulating. What follows is a short interview with him.

How old were you the first time you saw 2001: A Space Odyssey by Stanley Kubrick

I vaguely recall I was about five or six years old when I first watched it with my parents, but did not remember its content quite well until the last year when I watched it again properly. I was able to understand its context this time much deeper as I grew up.

You’ve always looked towards the future in your work, even when you were in design school, when were you first fascinated by space travel and also 3D printing?

Since I was at kindergarten, I always liked dreaming about future. I often imagined myself riding a fictional flying car and traveling a great distance. The future is such a free world in a way where no one knows the exact answer. Thinking about the ideal future just always made me happy.

My graduate collection at The Royal Academy of Fine Arts Antwerp is called WOODEN DIMENSION and was about the future imagined by people in the historical time such as that of Leonardo da Vinci’s. Looking back now, I do realise that I’ve always taken ideas of future into account with my design.

It was around 2013, there was a shape I really wanted to bring it into life but I was having a lot of difficulties realising it with any conventional techniques. Then I met an architect and thanks to him, I was introduced to 3D printing. From there, I began to think more about the possibility of making impossible into possible with the help of technologies.

How were you able to get into a discussion with JAXA and how did that go? Are you working with them on research for spacesuits?

Well, with JAXA, it’s not that we’re doing a research together. I just simply had a discussion with them. Hearing news everyday, I feel that the space is becoming more approachable day by day, and for anyone to be able to go to the space is just a matter of time. ‘How would humans dress when such time comes?’ When I came up with such a question, I just wanted to talk with a person who was studying spacesuits and so reached out to that person on the Internet. It was just as simple as that. When I had a discussion with him face-to-face, I learned that the circular philosophy was the underlying concept in living in the space where resources were extremely limited and then realized that the thinking behind the UNIT CONSTRUCTED TEXTILE, which we at YUIMA NAKAZATO had been studying for the last few years, was in line with their way of thinking. I gained inspirations from this conversation and developed ideas for my collection.

Can you explain the ”circular philosophy’ and how that was the impulse behind this collection?

When living in the space, it becomes necessary to continue using all goods in any way for as long as possible by recycling and reusing the same item over and over for different purposes since the amount of items we can bring from the Earth is extremely limited. We think this circular philosophy is in line with the underlying concept of our Unit Constructed Textile as it can be modified or repaired by unit, requiring minimum amount of materials. Its silhouette can be updated as many times as needed in response to changing taste or body shape, maintaining its functionality and keeping its wearer emotionally attached to the item.

For this collection we sourced disposed industrial products from around the world including some items originally designed to protect humans (e.g. airbags, parachutes) and road banners on Tokyo Metropolitan Highway. Then we turned them into the materials for our garments by dismantling and reassembling them through digital fabrication and craftsmanship. Given the circular philosophy, we thought it was natural to take any item as a viable material.

You know Pierre Cardin was the first civilian to put on a spacesuit in 1971, were you interested in the work of Cardin by any chance?

Yes, I studied Pierre Cardin in my research phase. People had dreams and hopes toward the outer space during the 1960s and 70s, and I thought his design was like a symbol of people’s minds at that time. I wanted to convey that today, as technology advances, the space is becoming something within our reach as opposed to the past where it mostly remained in our dreams by overlapping his time on our collection.

Tell me a bit about the process how pieces were laser cut and put together by hand and how your father worked to help in the process.

The first step is making a pattern data on CAD. Sometimes we use a 3D scanner for body-scan to collect measurement data if needed. We recently updated our system so that our software creates the cut pattern on our CAD data automatically. And then, we take whatever the materials we want, cut them on a laser cutter, and put them together by hand like a puzzle. The special attachment units that hold each piece of cloth are made using 3D printers.

My father (he is a sculptor ;)) built the table-like casing that holds all the necessary technical equipments in this process.

Let’s talk about your sustainable fabrics and what and how you used recycled materials.

UNIT CONSTRUCTED TEXTILE has been developed in order to liberate clothes from the shackles of sewing. Once fabrics are sewn together, it would take a amount of time and effort to adjust size and fix broken parts.

However, if one could change/swap elements of clothes such as materials and silhouettes as many times as you want, more freely and more instantly, it would become possible to produce one-of-a-kind to more people. I think people will treat specially-made one-of-a-kind clothes with more care and that they will become a life partner if they can be repaired and can adapt to changing body shape and trends.

In this collection, I used disposed industrial products after dismantling and laser-cutting them as mentioned earlier along with the Unit Constructed Textile. I wanted to propose a completely new relationship with garments in terms of both structure and material.

You showed during the couture, so that generally means ‘made to order’ how do you work with your clients and how can garments be adjusted to their body changes?

Traditionally, haute couture was accessible to a limited, small fraction of people. Our innovative manufacturing system marks a first step to a new, democratic couture that can be enjoyed by anyone.

We have reconsidered every step in the traditional cloth-making from measuring to sewing and updated them with the new technologies. Under our proprietary system with 3D scanner, auto-pattern-making program, and digital fabric cutters, it has become possible to manufacture one-of-a-kind item on the spot anywhere in the world for anyone in the world. We have named this factory system “TYPE 1”

Technology has always been a part of your DNA, how did you first get interested in this approach, what was the first garment that you created in this direction.

Technology is just a tool. I always begin my creation by imagining future. After drawing the ideal future, I start thinking about how we can reach there. Today, we live in a time where something that was yet possible yesterday could all the sudden become possible the next day. So I think there are many hints in things that are not possible yet.

The first ‘technical’ garment I created was in my 2013 collection where I used a 3D printer. When I imagined the future where each and every garment would be unique and different, I began to think digital tools such as 3D printers might become the driving force in making that future come true.

Are the pieces comfortable to wear?

I believe garments must be comfortable to wear. It is a functionality necessary in order for them to become adopted widely. However, it is not easy and requires a significant amount of time and resources for development.

Can you describe some of the pieces and how they were constructed and how you envision them being worn?

Our current thinking is to first offer non-customized item as a default, and then have our customers send in their items for customization to our atelier in a special box, whenever and for as many times as they want.

We hope that our customers find a new sense of relationship with a garment by continuing to wear it over a long period of time through customization and then handing it down to someone next. There is a tradition in Japan where people hand down their kimonos across multiple generations. I think it would be nice if we can hand down motorcycle jackets like that.

You have dressed a lot of performers, muscians, anyone you care to name?

Lady Gaga and Fergie, to name a couple. Going forward, I would like to dress not only artists, but also all the pioneers in diverse fields such as scientists, engineers, and entrepreneurs.

Is it true that you do not sew the garments but they are fastened together instead?

All pieces of cloths are put together with the ‘black dots’ on our garments. These attachment units are designed so that they adapt to various thickness and are also easy to detach. So I think it would make fashion more interesting when people start customizing these garments on their own.

What is your vision for the future as far as your fashion is concerned?

I’ve always been thinking of enriching people’s minds through fashion. Through costume design I learned the power of custom-made clothes in enriching the wearer’s life and became interested in delivering this experience to more people. However, it requires some innovative ideas to change the concept of cost, and I have been experimenting for the past few years. I am determined to continue my work toward the future that I envision where fashion bring more freedom, joy and enrichment to the wearers