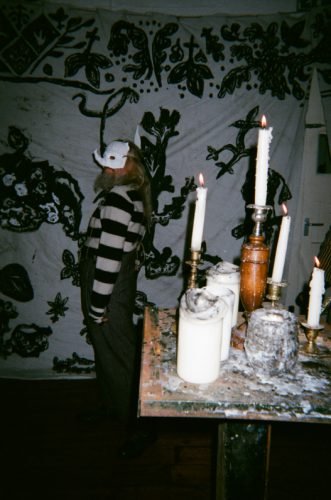 Over the course of a couple of them, John Alexander Skelton’s quasi-seasonal shows have become one of London’s most treasured, though still confidential, off-schedule meet-ups. Such was the case that last night, on Twelfth Night and fashion week not yet begun, the local regulars were queuing outside of St Mark in Dalston, fresh-faced still and not quite yet peacocking in temperature-appropriate puffers. Side by side too, were friends and family. Not just of the designer himself – though Skelton strikes you as the type who would on a good night invite along his fellow pub goers – but of the most distinguished folk theatre actors he regularly cast as models, who later lingered to chat and share a glass of hot cider after the performance. I say performance: they were dancing in pairs, dressed up in Skelton’s fourth collection and long-nosed, papier-mâché white masks the likeness of Pulcinella – or was it perhaps the plague doctor’s costume? “At the door, some can dance, some can sing. By your consent they shall all come in” formally announced the mask number one, bowing in a top hat topped with rosebud arches. This was true. In they all came, and then came famed folk singer Frankie Armstrong, singing The Whimple Wassail in this candlelit church, and along and on they all hummed “we hope that your apple tree blossom and bear / that we may have cider when we call next year”. Titled Wæs Hæl, the collection’s chief theme was – you guessed it – British folk theatre, and the sense of community it inspires among participants and fans. Skelton told me backstage that it was part of the tradition that performers should make up their costumes themselves, a combination of a DIY spirit and artisanal crafts that he of course couldn’t resist. Skelton is what in fashion we call a purist: even the drapes he painted himself. His garments are handmade and warm of crochet and handwoven wools, woven by Skelton at the loom in his studio. Finished with rows upon rows of buttons and fingerless gloves, the outfits are a patchworked feast of details – but what’s best, they look at the same time almost unjustifiably homey. 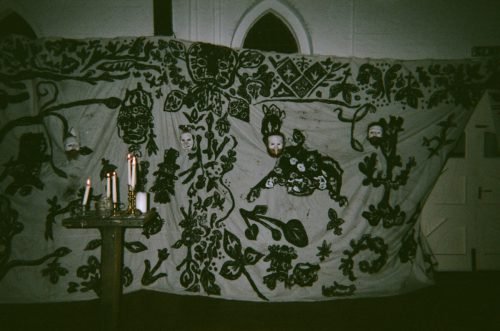 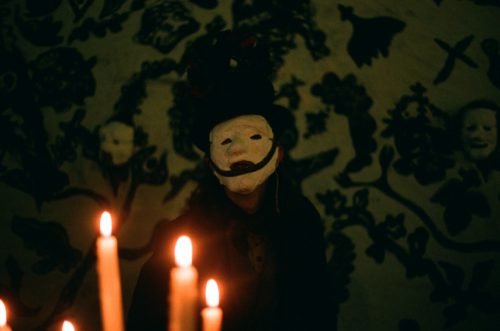 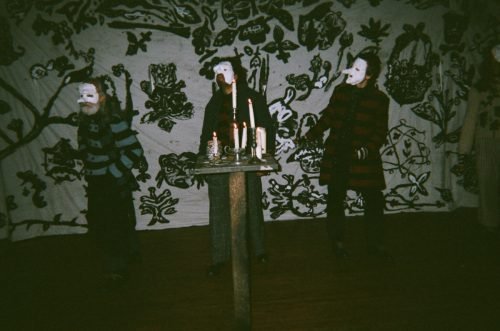